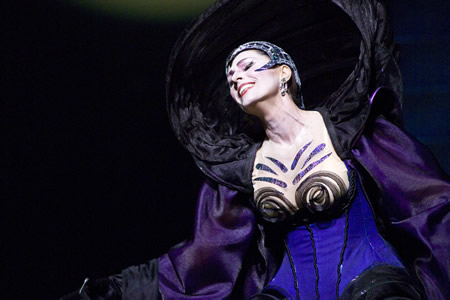 The Queen of the Night: Erika Miklósa

As far as this writer is concerned, Mozart’s “The Magic Flute” is not an acquired taste. You either love it or hate it at first bite. In the interests of full disclosure, I confess that, despite many servings over the years, I do not love it. That does not mean it is not a masterpiece and San Francisco Opera has given it a masterful production. A feast for the eye as well as the ear, “Flute” lovers will eat this show up. The rest of us had better just get over it.

The problem is not with Mozart’s music which, being Mozart, is glorious. And Donald Runnicles and his orchestra deliver it in its full splendor. But Mozart’s collaborator, Emanuel Schikaneder, who commissioned the work and wrote the libretto as well as playing one of the lead characters at the 1791 premiere, should have had the same padlock affixed to his mouth as he gives to Papageno the bird-seller. He does go on – and on. Especially in the second half, wherein the most of the Masonic imagery and preachy ritual resides (Mozart was an ardent Mason), it can seem – at least to those of us not mad for the piece – interminable. The part that is sung is fine but there is a great deal of spoken dialogue as well. Although this is the original work of much-venerated director Peter Hall, this time around director Stanley Garner could have wielded a scissors to good effect.

The production’s main appeal is visual. Designers from Marc Chagall to Julie Taymor have been drawn to the exotic imagery of the setting in an imaginary Egypt. This time around, Gerald Scarfe gives us a fanciful menagerie, a huge multi-colored serpent that seems to unfold from the proscenium arch, a combination ostrich/giraffe that teeters across the stage en pointe, not-so-scary lions, a villain who looks like a fat green frog and more. The three ladies who attend the evil Queen of the Night are stylishly clad in black ball gowns and Adler Fellows Elza van den Heever, Kendall Gladen and Katherine Tier sound as delightful as they look. The Queen herself (Erika Miklosa) outdoes them in splendor but seemed to be saving herself in Act One for her blockbuster bravura turn in Act Two. Or perhaps she was merely frightened, suspended as she was above the stage on a black disc. It could be a long fall. Ditto the three boys, sent to guide the hero on his quest. They gave directions from a flying boat, as is usual.

The story couldn’t be sillier. Tamino (Piotr Beczala) falls in love with a portrait of the daughter of the Queen of the Night (the lovely Dina Kuznetsova) and, in order to win her, must complete a set of trials set to him by her captor, Sarastro (Georg Zeppenfeld). Sarastro presides over a court dedicated to light and love and goodness. The Queen paints him as bad but he is really good and she is the bad one. Got that? Tamino is accompanied on his quest by Papageno (Christopher Maltman), the garrulous bird seller who seems to be part avian himself and who supplies most of the humor of the piece. All four of these principals sang beautifully and the lovers were easy on the eyes to boot.

It’s all played in appropriate comic book style and takes place in front of a gigantic pyramid that splits apart to form temples, palaces and various other landscape elements and is imaginatively lit by Michael Gottlieb. Actually, there is more that is right than wrong with this “Magic Flute.” It could be the reviewer who is out of tune.