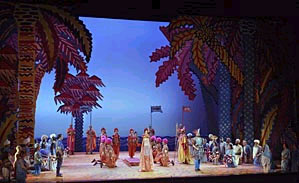 The Pearl Fishers, Bizet’s first opera, written when he was only 24, is loved for a few of its lustrous melodies which have been widely disseminated in recordings. But the opera is rarely staged, for reasons that become all too clear when heard at the opera house rather than from stereo speakers.

The work is more than centered on a love triangle–the love triangle is the whole kit and caboodle, with nary a subplot in sight. That’s not necessarily a bad thing, if the love triangle is credible with richly developed characterizations. But the latter are notably absent and the storyline develops in curious ways.

The opera was originally set in Mexico, but the locale was switched to Ceylon late in the game. The location was to meant to lend glamour and a frisson of the exotic, but the entire work is sufficiently generic to fit in most any location. Whether the center of the triangle is the Hindu priestess Bizet delivers or an Aztec medicine woman or, for that matter, an Inuit princess would hardly matter, although there would be fewer excuses in the latter case for scantily clothed dancers.

Zurga, the baritone, just named chief of his village, welcomes back his childhood friend, Nadir, the tenor. Before Nadir went on the road, they had both fallen for Leila, the Hindu priestess. They agreed that they would both forget her in order to preserve their friendship. In any event, Leila is presumably committed to virginity, so what’s the big deal here? The big deal is this duet between the two men, one of the most captivating settings for two male voices in all the operatic literature. It’s a paean to male bonding (with a hint of a homoerotic subtext).

But no sooner does Nadir get to sing alone than he reveals that he broke his pledge to forget Leila and had searched her out. They are lovers. The sweet-singing hero, then, is a lying double-crosser and the splendid duet, in retrospect, is an exercise in hypocrisy. Not, one suspects, what Bizet intended, but that’s how it works on stage. Leila, who has come to bless the pearl divers, pledges to remain chaste and veiled, but as quick as you can whistle Parvati, she’s bedded down with Nadir.

They are caught in the act, of course, and they’re sentenced to death at dawn. Leila makes a heartfelt plea to Zurga to spare Nadir and let her die to pay for their transgression. But Zurga, who has no compelling reason to be any more consistent than any of the other characters, sets fire to his village to distract the villagers so that the couple can flee safely. So much for elected leadership.

The long and the short of it is that it is hard to take any of this seriously as grand opera, in which great passions grow from characters possessed of at least a hint of verisimilitude and depth beyond the comic book level. The already static narrative is not helped by arias and ensemble pieces which more often talk of events in the past than move the plot forward in the present.

Now, a great deal of this could be forgiven if all the music were as enthralling as the first act duet. Alas, what follows in the score are large doses of prettiness uniformly lacking in sublimity. In the San Francisco production, neither lyric tenor Charles Castronovo nor baritone William Dazeley were sufficiently warmed up for their all-important first act duet, much of which was drowned out in the overenthusiastic volume of the orchestra under the baton of Sebastian Lang-Lessing. Castronovo and Dazeley, along with soprano Norah Amsellem, acquitted themselves well through the balance of the evening, the threesome of singers making a youthful and attractive menage.

The production, shared with San Diego Opera and Michigan Opera Theatre, was designed by fashionista Zandra Rhodes, who threw caution to the winds, as it were, offering the look of blown-up drawings by a Saul Steinberg on hallucinogenics. Wavy lines and hot colors abound. When a storm begins, the backdrop falls away to reveal another–all squiggly lines topped by thunder clouds. But that backdrop remains in view long after the storm has abated; lots of style here, but not quite enough attention to the text.

At every opportunity those half-naked dancers leapt onto the stage to choreography by John Malashock that did nothing to disabuse serious dance-lovers of their disdain for ballet on the opera stage. The dancing went beyond the ludicrous, however, and in a number of instances was unpleasantly intrusive on the music. Stage director Andrew Sinclair offered no relief.

In all fairness, it can be reported that the San Francisco audience seemed to be having a grand time on opening night.