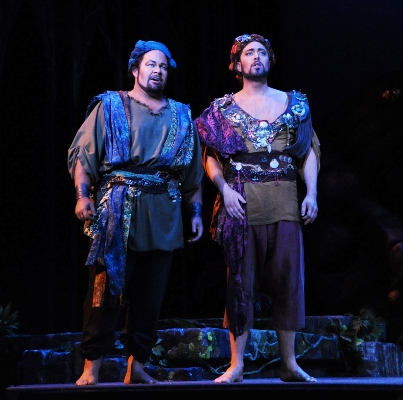 Georges Bizet was inducted into the operatic hall of fame with his perennially popular “Carmen.” But before that, long before, at the age of 25, he composed “The Pearl Fishers,” a shorter, simpler but no less dramatic love story set in ancient Ceylon (present-day Sri Lanka). This one has no fiery gypsies: only beautiful music and, for opera, a relatively happy ending. In spite of these virtues, it is rarely performed.

So, bravo to Opera San José for mounting a pretty good, occasionally great, production of this gem. The “great” refers to the choruses — and there are many of them — beautifully delivered (under chorus-master Andrew Whitfield) and especially refers to baritone Zachary Altman, who is not only the best-looking but best sounding thing on the stage.* Altman is a commanding presence as Zurga, the village headman of a remote group of fishermen who dive deep into dangerous waters in search of precious pearl oysters. Long ago, he and his closest friend, Nadir (tenor James Callon in a winning but uneven performance), both fell in love with a cloistered temple priestess and parted in a jealous rage. Now Nadir is back and so, we soon find out, is the priestess.

This is one of those virgin-takes-all tales. A holy woman, sworn to chastity, has been dispatched to pray for the safety of the fishermen. Veiled, she stands vigil on a high cliff and sings throughout the night. She will be rewarded with a pearl of great price for her labors but, should her virtue be compromised, the punishment is death. Well, when the veil slips and Leila, the votary, recognizes Nadir as her long-lost love, you can guess that no way is she gonna get the pearl. Once they are caught, the fate of the guilty lovers rests in the hands of the still-jealous Zurga, making for some powerful dramatic and vocal fireworks.

Leila (Melody King in the performance I attended) is given an opening aria of multiple coloratura trills. All I can say is King nailed most of them. Her voice, warmed up in the second act and, by the thrilling duet with the baritone near the end, was in fine form. Altman’s delivery of an aria of regret just preceding was splendid. The cast of principals was rounded out by bass Silas Elash in the small role of Nourabad, the dour priest who exposes the lovers’ tryst. Dancers accompanied some of the choruses to good effect and choreographer Lise LaCour’s ethnic dance patterns worked except when she threw in a few balletic pirouettes. The scenery, by Charlie Smith, and costumes, by Elizabeth Poindexter, were attractive and Pamila Gray’s lighting design was stunning, especially in the storm scene.

“The Pearl Fishers” is sometimes considered to be a one-tune show. It’s definitely more than that, but one melody, a duet of reconciliation between Nadir and Zurga (“Au fond du temple saint,”) is so hauntingly beautiful that it often is called “The Pearl Fishers Aria.” It only is sung once, early on, but returns as an orchestral motif again and again, much like the five-note “Fate” theme in “Carmen” does. Altman and Callan did it proud and, even if there were not so many other good things about this opera, and there are, it would be worth the ticket price just to hear it sung.

* The production is double-cast, with three different lead singers alternating at performances.