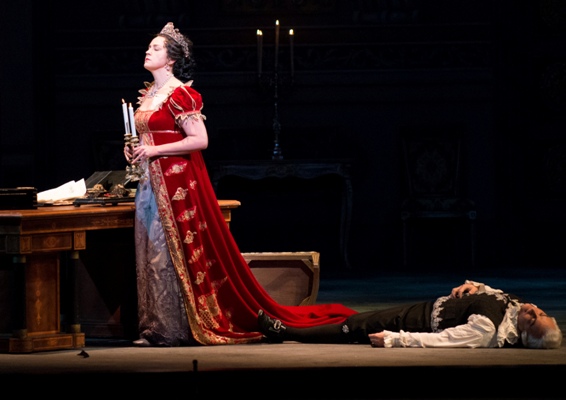 ‘Tosca’ (with Moore to the Rescue)

The most exciting thing about opening night of San Francisco Opera’s “Tosca” was the soprano. I mean the one who didn’t come back after Act I.

Angela Gheorghiu, the famed Romanian diva who enchanted San Francisco audiences in 2007’s “La Rondine” (also Puccini) and again as the composer’s Mimi in “La Bohème” the following year, has been amassing something of a diva’s reputation ever since. Six weeks ago, this writer, on a first-ever foray to Milan’s La Scala, eagerly anticipated her Mimi — only to have her be a no-show. At least she made it through the first act of “Tosca” this time, before becoming ill and leaving the house.

Gheorghiu has been blackballed by Chicago’s Lyric Opera for not attending rehearsals. Does anybody see a pattern here? Glittering operatic reputations have been broken this way. Remember Teresa Stratas? How about Kathleen Battle? The role in San Francisco will be shared by an American diva, Patricia Racette, who received raves as Tosca at the Met. Wanna bet she doesn’t miss a beat, let alone a performance?

But the show must go on and, after an over-long intermission that allowed Melody Moore, the singer covering Gheorghiu, to get into costume and makeup, it did. Moore, a journeyman soprano if not yet a star, slipped into the character in less time than it took to change her clothes, and her “Vissi d’arte,” the big set-piece midway through the second act, earned a chorus of bravas! from a grateful audience.

Unfortunately, we couldn’t summon the same zeal for the tenor, Massimo Giordano. His opening aria, “Recondite armonia,” sounded forced. By his next big number — in Act III as he awaits execution for treason – “E lucevan le stelle,” he had warmed up a bit, but by then, it was essentially too late. He was, as they say, a dead man.

The real male star of “Tosca,” however, has always been the corrupt and lecherous secret police chief Baron Scarpia, and this production has a good one. His voice dripping menace, Italian baritone Roberto Frontali — who will share the role with the American Mark Delavan — was as mesmerizing as the proverbial snake as he plotted to get the rebel Mario Cavaradossi (Giordano) into jail and Mario’s lover, the singer Floria Tosca (Gheorghiu/Moore), into bed. The Act I closing “Te Deum,” as he announces his evil intent against the background of a religious procession, was impressive, if not as stunning as in other productions I’ve seen.

In Act I, Tosca is kittenish, a woman in love, teasing and badgering her lover about his possible interest in other women. By Act II, when she is bargaining for his life, the kitten turns into a tiger. You wouldn’t want to be around Moore with a fruit knife in her hand. Once she has dispatched the villain, she places candles at his head and a cross on his chest because Tosca, for all her passion, is a good Catholic girl.

All this takes place during the Napoleonic wars, and the costumes (by Thierry Bosquet, who also did the set design — in homage to the original production that opened the San Francisco War Memorial House 80 years ago) were sumptuous. Nicola Luisotti’s orchestra played beautifully — if a little loud, as seems often to be the case with this conductor. Jose Maria Condemi directed with an emphasis on the political aspects of the tale.

All told, it was a serviceable “Tosca,” if not a great one. Although Gheorghiu sang her first act well, I doubt that even she could have raised it to the heights.