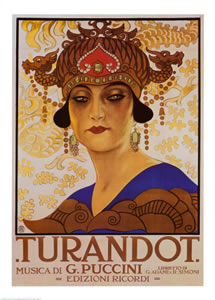 Pity poor Franco Alfano. Alfano was a minor league Italian composer in the 1920s contracted to complete Puccini’s last Opera after the maestro’s death. Legend has it that Puccini’s own son plumped for the unknown in the face of the fear that a recognised composer being hired to finish his father’s last masterwork might steal the old man’s thunder. Anyway, Franco Alfano picked up the threads of the third act, and using Adami and Simoni’s libretto (based on a play by Carol Guzzi) and, after six months, produced a musical resolution to Puccini’s last composition. However, conductor Arturo Toscanini was allegedly less than enamoured with Alfano’s work, and on the night of its premiere at La Scala, Milan on April 25th, 1926, he made good on Puccini’s own prophecy that Turandot would be performed uncompleted and someone would announce that where the music stopped was where he died. Subsequent performances were ‘complete’, but the point was made, Puccini was dead and his vision for the resolution of Turandot is unknown.

He had set himself a titanic task. The titular character, a Chinese princess, is a singularly repulsive character, not even redeemed by roguish charm of many male opera villains.Turnadot, allegedly in a act of retroactive proto-feminist revenge for the thousand year old rape of an ancestor, has decreed that any man who wants to marry her must first answer three riddles. Failure means death. As the opera begins, the Prince of Persia is the latest for the chop, but this has not dissuaded Calaf, the displaced prince of a lost kingdom, from falling in love with the princess and being determined to try his luck. One wonders why he might bother, except on a metaphoric level, as, seen by Adami and Simoni, she is a cold and vicious character and lacks anything in the way of charm. Puccini does little better by her, though he had, according to his correspondence, visions of a powerful redemptive duet between Calaf and Turandot which would bring the house down at the end of the third act. He never wrote it though, and although Alfano had a go at it, not everyone gets to hear this.

Opera Ireland’s current presentation of Turandot sticks to Toscanini’s dictum that without the maestro, there is no finale. Director Dieter Kaegi instead closes on a beautifully realised moment of stasis – an unnaturally sustained final note is heard from the chorus as the lights go down on a frozen tableau of Calaf (Chinese Tenor Warren Mok) and his father Timur (American Bass Brian Jauhiainen) crouched uncomfortably over the body of Timur’s servant Liu (Japanese Soprano Mari Moriya), whose long cherished but hidden love for Calaf has prompted her suicide to protect him. The production closes out comfortable with its lack of musical or narrative resolution.

Turandot is a triumphant return for Opera Ireland to the refitted Gaiety Theatre, and the acoustics have never sounded better. This may in part be because of the extensive choral work in Puccini’s music, and the direction of the partly Chinese chorus by Brigitte Munet. It may also be because all of the action takes place on a metal stairway designed by Paul Keoghan to serve as an effectively equalising platform for the very full stage of performers. Video and lighting screens rise and fall in front of and behind the cast, but mainly the singers move up and down the metal stairs, and vocal projection is, for once at this venue and hopefully for a long time more, superior.

Mok is a good Calaf. He smoulders darkly with passion and determination, and handles the showstopping aria Nessun Dorma in the shadow of Luchino Pavarotti (to whom the production is perhaps clumsily dedicated) without stepping outside of his own overall characterisation. In the utterly thankless role of Turandot Italian Soprano Stefania Spaggiari fares less well. Her peacock-head movements and overall vamp-queen demeanour feel more 1950s sci-fi than 1920s high opera, and without the dignity of a musical or narrative redemption, she can achieve comparatively little. The showstealing turn comes from Moriya, who gained a rather embarrassing lion’s share of the audible plaudits at the end at Spaggiari’s expense. Though her character is more sympathetic and the music more delicate as befits the role, if truth be told her rendering is also beautifully melodic, subtle, and touching. Her acting performance is also more naturalistic and very believable, and this comes, again, in the face of a passionate Calaf and a Turandot who looks like she’s out to get Flash Gordon and bite him.

The overall production is nonetheless gripping, moving, and very quick (in a good way). Kaegi keeps a strong pace after the blisteringly fast first act, and the visual gimmicks (film sequences, bikes on stage) are deployed in a reasonable and effective manner, not just for effect. There may be some indexical confusion around the props and costuming, as the imagery of the imperial Chinese court does not sit quite right with the Maoist uniforms, automatic pistols and Turnadot’s Mercedes. The fact is though that history is rather bunk here, other than the history of Opera itself, and that weighs rather heavily upon how you respond to the production. You either buy into Kaegi’s decision not to close things out or you don’t. Me? I enjoyed it, and accept the many loose elements in the production as part of an overall raggedness that defines the work: after all, had Puccini finished it, he may well have even revised it, so what plays on stage is in no sense a closed and coherent piece.