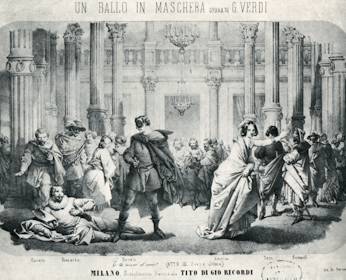 The assassination of a king at a masked ball is an event rife with dramatic possibilities, so it is no wonder that when King Gustavus III of Sweden was shot in the back at just such an event in 1792, someone, sooner or later would turn the incident into an opera. Librettist Scribe and composer Auber were first at the gate, in 1833, with an opera that was successful then, though now largely forgotten, except that the libretto became the basis for Antonio Somma’s reworking for one of Verdi’s most melodious outings. (Historically, Gustavus died a slow death of gangrene; in Verdi’s opera, he needs last only long enough to sing a final aria before he buys the farm.)

Because the assassination of a royal was seen as a politically threatening subject, government censors objected, and the original European setting of the 1858 opera was shifted to Boston. The entire brouhaha, as happens more often than not with censorship, brought the work wide notoriety, which could not have hurt the box office take and surely did little to conceal the feared theme of the opera. In the longer run, the effect has been that generations have listened to arias by characters named Riccardo (the Governor of Boston), Renato (his secretary), and Amelia (Renato’s wife) – all of which names, and carryings-on as well, would have come as a great surprise to the English Puritans of colonial Boston.

Opera being the fluid medium that it is, various productions over the years have not necessarily stuck with the Boston setting, but have brought it back to Italy or, sometimes, to Stockholm, which sounds appropriately authentic only until one realizes that the Scribe/Somma libretto has about as much to do with the historical Gustavus as Oliver Stone movies do with modern political history. Too, the melodramatic libretto is somewhat overburdened with coincidences that stretch credulity.

No matter. The setup is perfect for Verdi to offer glorious arias and ensembles laden with love and yearning, jealousy, betrayal, anger, revenge. A king lusts for his secretary’s wife; she is an innocent, but is torn with desire for the king. Her husband learns of what he believes to be their affair, and, in a group of conspirators, draws the lot that names him assassin. Having Amelia be the one to physically draw the lot, unknowing of its purpose, is one of the nicer flourishes of the book. Throw in a fortune-telling gypsy and a soprano pants role for a page of the court, add some festive sets and glamorous costumes and – presto! – grand opera at its most delectable.

San Francisco Opera’s 1977 production, resurrected for the 1999 season, uses the Stockholm location in highly traditional settings. The ball scene, with commedia del arte and ballet performers on the ballroom stage and observers in boxes watching the merrymaking, is suitably rococo and impressively grand.

After a somewhat tepid opening act, largely the result of a strong-voiced, but emotionally inert Ulrica (Eugenie Grunewald), the drama kicks in in the second act with Carol Vanness in good voice as Amelia, acting up a storm opposite the fine full voice of Richard Margison as Ricardo. Mr. Margison earned deserved praise last season for his Calaf in Turandot; both his voice and his confident stage bearing have grown over the past year in tandem with his girth.

The highlight of the evening was an intense and heartfelt Morr�, ma prima in grazia by Vanness. The important following aria by Renato (Sergei Leiferkus) was dramatically effective, if not 100% musically pleasing: Leiferkus’ voice can have an unpleasantly hard edge at times. The momentum of the second act was sustained into the third, producing, in totality, a satisfying musical drama. When the singing and acting reach this overall level, Verdi’s Ballo transcends its underlying melodramatic roots.