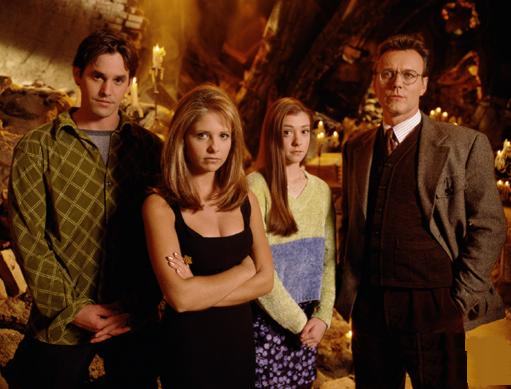 Buffy Summers is like most freshmen at the University of California, Sunnydale. Uprooted and overwhelmed, a little dreamy and scattered, she struggles through her classes and tries to find a boy who can live up to her memories of the high school sweetheart she left behind. Of course, she has her eccentricities. She spends most nights secretly patrolling the campus, armed with wooden stakes, hunting down the vampires and demons that plague suburban Sunnydale. And that high school sweetheart? Angel, a 243 year-old vampire turned demon hunter.

Buffy the Vampire Slayer has been the best, and most underrated, show on television since its 1997 debut. Each week this twisted hybrid of Dark Shadows and Beverly Hills 90210 works small miracles: it is unfailingly intelligent, it never condescends to its teenaged audience, and it deals with the most primal adolescent emotions with profound respect for their outsized intensity and importance.

It’s also hilarious. The dialogue has the bitchy, surprising tang of high school insults ("What are you gonna teach when you fail in life? Advanced loser-being?") and the show deftly weaves jokes into the horror. Gothic trappings and Clearasil commercials aside, this is anything but kid stuff – only The Sopranos is as resonant and consistent an entertainment.

The show was created by Joss Whedon, who was also responsible for the terrible 1992 film of the same name. The television version initially took up the film’s one-joke premise (airheaded valley girl learns that she is "The Slayer," mankind’s protector against the forces of darkness) but quickly grew beyond it. For all its humor, the show never hedges its bets; the monsters Buffy faces are real – major characters die on this show – and so are her pain and isolation.

Horror succeeds or fails depending upon its success in externalizing our fears. Boogie men from Dracula to Freddie Kruger speak to our anxieties by giving them a face. Buffy takes this a step further, using the fantasy world implied by the existence of vampires and werewolves as a means of exemplifying not just the fears but the full emotional range of teenage life. A conventional show – even one as interesting as Freaks and Geeks – dramatizes the back and forth of young love by replicating it: if a girl must choose between boyfriends, we hear their conversations and she describes her feelings. For Buffy, these moments are dramatized as true life or death moments. She had to choose between slaying her vampire boyfriend or bringing on Armageddon.

The show carries off a tricky balancing act, shifting tone from self-aware comedy ("We could go night clubbing, or we could save the world from certain destruction. Of course, we did that last night") to straight action to the giddy, operatic sweep of its darkest moments. The show trusts its audience absolutely; it prefers forward motion to exposition, and assumes we’re smart enough to follow along.

The inspired cast keeps the show grounded in emotional reality even in its most lunatic moments. Sarah Michelle Gellar, as Buffy, negotiates the shifts from superhero to self-deprecating, lovelorn college girl with absolute assurance. Alyson Hannigan is even better in the role of Buffy’s best friend Willow. She’s developed lately from nerdy comic relief to the emotional center of the show. In recent episodes, mourning the flight of her boyfriend Oz (Seth Green), she’s been devastating; she has a transparency and vulnerability that’s rare in screen acting and unheard of on television. James Marsters, as the ferocious, if incompetent, vampire Spike, is a delightful B-movie villain, pitching his performance somewhere between Johnny Rotten and Charles Manson.

When last season ended with – literally – the high school graduation from Hell, it looked like the show had gone as far as it could. Several major characters were left dead or missing in action, and the plot that had given the show its best moments (the doomed love of Buffy and David Boreanaz’ Angel) had run its course. Boreanaz was given a spin-off series (the more conventional, and far less engaging, Angel) and the slow, dull decline that catches up with all interesting television series seemed imminent.

Instead, the show has managed to improve this season. Eliminating Angel and sending the characters to college has driven the writers to explore an entirely new range of material, moving from puppy love and lost virginity to the first, tenuous steps into the adult world. College is every bit as painful and confusing as high school, and the show catches those precarious moments again and again. Buffy the Vampire Slayer only gets richer as the characters move on with their lives. Imagine what Whedon could do twenty years down the line with a middle-aged Buffy, battling evil between business dinners and P.T.A. meetings.