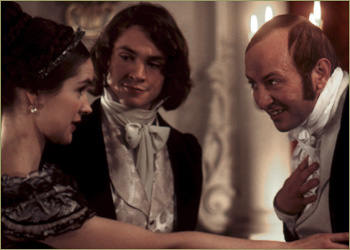 Last Christmas, Turner Broadcasting and Hallmark Entertainment joined forces for a threadbare adaptation of Charles Dickens&#146; A Christmas Carol starring Patrick Stewart. The modest budget seemed to be gobbled up in the first half-hour when Marley&#146;s ghost was granted a few seconds of costly CGI special effects. Nevertheless, the teleplay was successful enough with audiences to inspire the producers to return this holiday season with a far more ambitious and expensive two-part miniseries of David Copperfield. The results are surprisingly felicitous, thanks to its elegant production design and the energetic efforts of veteran director Peter Medak (The Ruling Class, The Krays). Although the acting talent overall isn&#146;t equal to the first-rate David Copperfield that aired a scant nine months ago on PBS Masterpiece Theatre, this latest version is visually impressive and captures a fair measure of the novel&#146;s Dickensian spirit.

British newcomer Hugh Dancy (last seen in Masterpiece Theatre&#146;s Madame Bovary) is very fine indeed. He brings an air of suppressed rage and sensuality to his portrayal of the adult Copperfield. It&#146;s a romanticized interpretation of the role, yet remains true to Dickens. The novel, it should be remembered, is narrated by Copperfield in his late-twenties, wise beyond his years and brimming with dark emotions and heartbreak. Previous adaptations have invariably given us a hapless grown-up naif without the smoldering complexities that churn beneath the character&#146;s genteel fa�ade. Like Dickens himself, Copperfield rapidly matured into a self-assured writer. Also like Dickens, he is incapable of forgetting the psychic and physical abuse of his childhood.

The strongest scene in the teleplay&#151;scripted by John Goldsmith&#151;epitomizes the theme of unresolved childhood wretchedness carried into adulthood. On the surface it&#146;s a familiar moment in every film version of the novel: eight-year-old Copperfield (Max Dolbey) is beaten mercilessly by his malevolent stepfather, Mr. Murdstone (Anthony Andrews). Scriptwriter Goldsmith, however, does something unique with the material. He crosscuts between the young Copperfield&#146;s beating and the adult Copperfield trying&#151;and failing&#151;to restrain his emotions as he puts pen to paper. Each bruising snap of Murdstone&#146;s hickory switch ricochets across the years and causes the fledgling author to recoil in recollected misery. The sequence is powerfully edited and imparts an unforgettable illustration of the wounding persistence of memory.

Somewhat less credible in their roles are the two American &#147;name&#148; talents added to the mix as audience insurance: Michael Richards and Sally Field. Richards (best known as the hyperkinetic Cosmo Kramer on &#147;Seinfeld&#148;) plays Wilkins Micawber, one of Dickens&#146; most fanciful and memorable characters. Clearly taking his cue from W.C. Fields&#146; hilarious turn as Micawber in the 1935 George Cukor film, Richards gives a shtick-laden performance complete with googly-eyed double-takes, head-over-heels pratfalls, stumbling into doorways, and spinning on his heels like a windup automaton. In other words, he plays Micawber as a Victorian-era Cosmo Kramer. It&#146;s a weirdly clever idea and Richards is undeniably funny in his 1850s wardrobe and gleaming bald head. After all, Micawber and Kramer both share a kind of holy fool&#146;s optimism in the face of adversity and ill-fated schemes. Unfortunately, the performance is fatally marred by Richards&#146; godawful elocutionary attempt at a stentorian British accent

Sally Field has excelled in no-nonsense film roles (Norma Rae, Places in the Heart, Not Without My Daughter) that embody bedrock American values like self-reliance and plucky resolve. She effectively transposes these qualities to the character of Betsey Trotwood, Copperfield&#146;s stern aunt and eventual benefactor. But Field seems to lack a peculiarly British strain of loopy eccentricity that the role demands. When called upon to perform Betsey Trotwood&#146;s signature behavior of chasing donkeys from her lawn (to the battle cry of &#147;Don-keysss! Don-keysss!&#148;), the actress is shrill and humorless rather than endearingly nutty. Aside from Richards and Field (both of whom take up less screen time than their star-billing would suggest), David Copperfield is admirably populated with a competent British cast. Actor Frank McCusker, virtually unknown in the States, is exceptional as Copperfield&#146;s unctuous nemesis, Uriah Heep. It&#146;s also great fun to see a seasoned performer like Alec McCowen (Frenzy, Travels With My Aunt) shine in the brief but beautifully etched role of Mr. Jorkins, a harried and supercilious investment lawyer.

Filmed on location in Ireland, the production has the requisite look and feel of nineteenth century England (which apparently isn&#146;t as easy to recreate in modern-day England) replete with Georgian architecture, crumbling labyrinthine apartments, quaint shops, and ominous factories. As is to be expected, several of the subplots are either short-changed or jettisoned altogether. Uriah Heep&#146;s story line holds up better than some of the others, although his crime is inexplicably altered from the novel&#146;s bookkeeping fraud and embezzlement into a simplistic jewelry theft. The dastardly wooing of Copperfield&#146;s childhood sweetheart by his school chum Steerforth (Paul Bettany) is set up in an interesting fashion, but then unceremoniously dropped from the script without a satisfying conclusion. To be fair, no adaptation of this length can adequately address the richness of the convoluted and interlocking narratives. For viewers who find the yuletide season incomplete without a dose of Dickens, TNT&#146;s David Copperfield is a diverting alternative to the competing versions of A Christmas Carol that fill the television schedules.

(19375)
$20.99 (as of January 23, 2021 - More infoProduct prices and availability are accurate as of the date/time indicated and are subject to change. Any price and availability information displayed on [relevant Amazon Site(s), as applicable] at the time of purchase will apply to the purchase of this product.)

(7832)
$6.99 (as of January 23, 2021 - More infoProduct prices and availability are accurate as of the date/time indicated and are subject to change. Any price and availability information displayed on [relevant Amazon Site(s), as applicable] at the time of purchase will apply to the purchase of this product.)
related posts