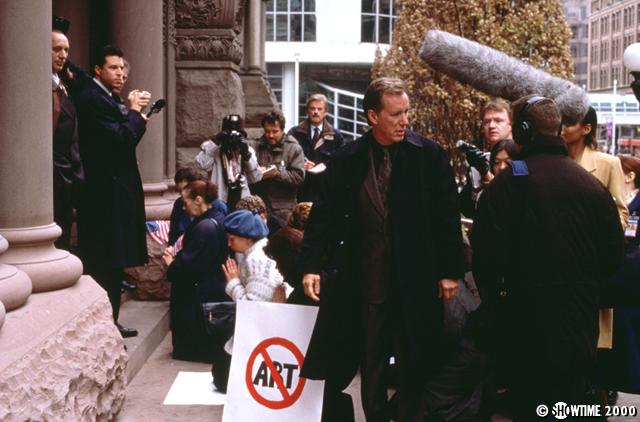 Playing With the Edge: The Photographic

In 1989, the Corcoran Gallery, a prestigious museum in the nation’s capital, capitulated to the bigotry of the then ascendant religious right wing and, in an egregious display of curatorial and institutional cowardice, cancelled its scheduled exhibition of the photography of Robert Mapplethorpe. The Mapplethorpe show had already been scheduled for the following year at the Contemporary Arts Center in conservative Cincinnati, the last place anyone would anticipate a showdown between protectors of the First Amendment and the self-appointed zealots of censorship. But a courageous curator, Dennis Barrie, with the support of most of his board, opened the show as planned. As a result, Barrie was indicted and put on trial on pandering and obscenity charges.

Dirty Pictures tells Barrie’s story in yet another mutation of the documentary form. Showtime’s new film is based on the factual elements of the story, but uses a fictionalized script that does not pretend to be a documentary recording of what happened. At the same time, the film uses both archival footage of the likes of Jesse Helms, George Bush (p�re), and perennial conservative loser Patrick Buchanan and talking heads interviews with Salmon Rushdie, Barney Frank, Bill Buckley, and others.

The structural decision was a clever one, since, in theory, the fictionalized story could best convey the emotional impact on Barrie and his family of being at the center of this highly charged case and the price both parents and sons paid, becoming the targets of personal harassment, bribery attempts, and bullying by the righteous protectors of "family values." But even the superb acting skills of James Woods (Ghosts of Mississippi, Salvador) cannot save the scripted portion of the film from the banality of the writing. The lines with which Woods was provided simply don’t allow for a convincing portrait of an erudite and ambitious museum director.

In contrast, the archival clips are well chosen to display the empty arguments of the pandering politicians and the talking heads are a pleasure to listen to: Frank, always articulate and focused on the meaningful heart of the issue; Bill Buckley, also superbly articulate as he propounds his view of America as an extension of the Connecticut aristocracy; but most of all Salmon Rushdie, whose personal experience of harassment because of his outspoken writing qualifies him as no other to speak on this issue. And he does, with words which alone make Dirty Pictures worth watching.

It is hard to imagine doing a film on the Mapplethorpe controversy without showing some of the photos. To the credit of Showtime and the film’s producers, a good many of the photos are shown, albeit in short cuts, but sufficiently to allow both a graphic sense of the provocative subject matter in the handful of controversial photos and the extraordinary beauty of all of the photos. Mapplethorpe was, after all, an artist who was interested in a great deal more than homoerotic and s&m sexuality; his portraits and flowers and other work are memorable, too. Only the mind police miss the beauty of the whole and see just that which threatens them.

A scattering of scenes in this complexly structured and well edited film are speculations on what the deliberations of the jury might have been like. The presiding judge is portrayed almost as caricature (splitting legal hairs, for example, over whether CAC is a gallery or a museum), but it would appear that such a view may be substantiated by the record. An unfortunate miscalculation is the performance of Leon Pownall as the prosecuting attorney; it’s a distracting Orson Welles impersonation without the sinister power Welles might have brought to the role.

It spoils nothing to speak of the legal outcome – an ending in fact that speaks eloquently to the credit of the justice system. But in a brilliantly conceived postscript there is a reminder that, in spite of the legal victory, the wide publicity of the case and the harassment tactics to which the Barries were subjected would have a chilling effect on other curators and other boards considering potentially controversial exhibits in their venues.

Had the Barrie characterization been better written and more convincingly realized, Dirty Pictures might have had a genuinely profound impact. Director Frank Pierson (A Star is Born, King of the Gypsies) has nonetheless wrested together a credible and dramatic statement despite the weakness in the screenplay.