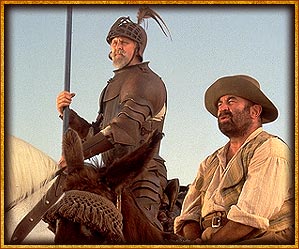 Cervantes’ great (and voluminous) novel, Don Quixote de la Mancha, with its captivatingly eccentric hero, witty satire, and literate wisdom, has held readers’ attention for four centuries. It contrasts the grand against the mundane, the fantastic against the practical, the ideal versus the real through the picaresque adventures of its knight errant and his squire Sancho Panza. This, the original road story/sidekick caper, has been brought to the screen frequently if not altogether successfully: a 1903 silent, a 1933 version in which the knight was played by the great Russian basso Feodor Chaliapin, a 1934 animated cartoon, a couple of television productions, a porn version, even a 1992 film carrying Orson Welles’ name in the credits, though he died in 1985 – but that must be a different story. And, of course, there is the enormously successful stage musical, Man of la Mancha, which was translated to the screen (receiving a tepid reception) in 1972 with Peter O’Toole and Sophia Loren.

That there hasn’t been a major attempt to make a properly-scaled film version, faithful to the novel, is perhaps more a testament to its massive size and subtle complexities than to any known modesty on the part of Hollywood producers.

Now along comes John Lithgow, bankable, as they say, after half a decade starring in a popular television sitcom, Third Rock From the Sun. Lithgow had a distinguished acting career on Broadway in the 70’s and 80’s and has been twice nominated for Academy awards (The World According to Garp, Terms of Endearment). But since Terms of Endearment in 1983, though he seems to have worked constantly and his filmography is lengthy, there is hardly a title of note. Having reached his mid-50’s, Lithgow says that "Now is the time for me to be doing [Don Quixote]" and he had no trouble getting TNT to back this expensive project. A chance to make the first memorable screen production? A chance to regain momentum in a career that went, artistically speaking, from the sublime to the mediocre? Unfortunately, neither has been achieved.

The broad challenge presented by Don Quixote is to reduce the sheer volume of the written work to something manageable on the screen and there is no fault to find with the incidents chosen for inclusion in TNT’s production. The problem with John Mortimer’s screenplay is more one of tone and sensibility: where Cervantes is scathingly satirical, Mortimer is blandly farcical; where Cervantes is romantic, Mortimer is saccharine and sentimental. (After Tea with Mussolini one is hardly surprised, but Mortimer’s great television series Brideshead Revisited inspired hope for something better here.)

The failures in the writing are little assuaged by Lithgow’s performance, which, in the first half of the film is so broad it turns Quixote into a goggle-eyed buffoon, so single-toned it becomes tiresome. Cervantes’ Quixote may be seen by the characters around him as a laughable fool, but together with his comical craziness there is always both an idealism and a set of values that together sustain the hero’s essential dignity for the reader, if not always for his fictional companions. The definitive performance (is it even possible?) would need to capture both aspects within the character, not, as here, have him be a fool early on, morphing into a mellow idealist later.

There are some nice bits – such as when Quixote charges onto the stage of a troupe of traveling players to save the heroine he sees as a damsel in distress. His madness meshes into the drama and he joins the cast to take a bow and accept a round of applause at the end. In a later scene, Quixote’s speech at the Duke’s dinner, although rather a Cliff’s Notes statement of theme, is touching as delivered by Lithgow.

The supporting cast is grand – Bob Hoskins making an earthy, cockney Sancho Panza, Isabella Rossellini charming and luminously beautiful, if little seen, as the Countess. The production is lavish, filmed on location in Spain, with beautiful settings and costuming.

The final major miscalculation was a decision to portray Quixote’s visions in a literal way, using special effects to show the windmills turn into giants, to show a modest inn turn into a castle, and – pathetically pandering to what perceived audience? – to show Quixote and Panza’s blindfolded ride on a wooden horse turn into an extravaganza of tired, kitschy design that would make the Disney Studio blush. The giants are ho hum, the castle just another castle. There is no magic here; creativity was sorely lacking, both in the design of the ordinary-looking effects (Jim Henson’s Creature Shop) and in the choice to use them at all. How much more powerful it would have been to leave the fantastic images to the audience’s imagination, charged by a great character portrayal. But that – and a great Don Quixote on screen – is in a film that has yet to be made.