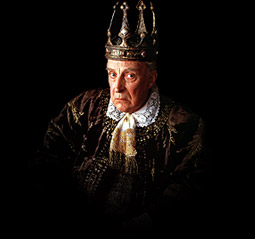 Mervyn Peake&#146;s Gormenghast trilogy is a rich, weighty series of novels &#150; one that is as widely loved as it is hard to categorize, varying in tone from Tolkein-esque fantasy to Dickensian social drama to gothic horror a la Edgar Allan Poe. Although it boasts a massive cast of eccentrics and grotesques, the series&#146; main character is indisputably the vast and labyrinthine castle of Gormenghast, within whose ancient stone walls the events of the trilogy take place.

In an attempt to step boldly into the new millennium, and to distance itself from its image as the stuffy home of inoffensive middlebrow fare, the BBC took on the seemingly impossible task of adapting the trilogy&#146;s first two novels into a total of four hours of television. As with all such adaptations, a great deal of plot and many minor (and indeed major) characters have been cut, but the real task facing the adapters was to attempt to translate Peake&#146;s language to the screen, and in this task they have succeeded surprisingly well. If Franz Kafka and Charles Addams had together rewritten Hamlet, and the resulting text had then been filmed by Terry Gilliam, the finished product might well have resembled this series.

The story revolves around a decaying, crumbling city state, ruled by a monarchy that is simultaneously all-powerful and purely symbolic. Life in Gormenghast seems to be an endless series of hollow ceremonies and pointless exercising of feudal privilege, while the caste-bound civilians toil fruitlessly in abject squalor. Into the penthouse of this teeming anthill is born an heir, and his arrival sets in motion a chain of events so wide in scope that to attempt to summarize them here would be impossible. The important point to remember is that this heir, Titus Groan, is more of a catalyst than a central character in the first two novels. The real protagonist here is a cunning young kitchen boy named Steerpike (it should by now be obvious that Peake shared with Dickens a love of outlandish character names). Steerpike leaves his place in the castle kitchen and, driven by a heady combination of ambition, jealousy and bitterness, sets out to rise through the ranks of this moribund hierarchy. His journey, then, becomes our journey.

And what a journey it is. Fans of the books were typically pessimistic about the prospects of a screen adaptation, but when this series – the BBC&#146;s most ambitious undertaking ever – aired in Britain last year, it was very well received, both by critics and by audiences.

An all-star cast was assembled to fill the shoes of Peake&#146;s rogues&#146; gallery, and nearly without exception the casting is top notch. Welsh actor Jonathan Rhys-Meyers seems born to play the Machiavellian Steerpike. Meyers was fabulously sensual, all lips and cheekbones, as the snake-hipped glam rocker Brian Slade (a thinly veiled David Bowie) in Todd Haynes&#146;s film Velvet Goldmine. Well-served here by both lighting and costume, he comes across as a cross between a young Mick Jagger and Count Dracula as he strides through the castle&#146;s halls with a suave, imperious swagger that makes women swoon and men hug the walls. Initially cautious, his character slays and manipulates his way up the food chain with increasing gusto, and the feline Myers is equally suited to suppression of rage as he is to rage itself.

There is a great deal of talent on display in the extensive supporting cast. From Christopher Lee as the gaunt and decrepit servant Flay, to Richard Griffiths as Swelter, the porcine thug who runs the kitchen, to the eerie, otherworldly Zo� Wanamaker and Linsey Baxter as the helium-voiced and childlike twin sisters of the king. One of the only bum notes, unfortunately, is Titus himself, an upright young lad who whose reluctance to assume the throne is more of a teenaged sulk than it is a revolution. Playing Titus is a thankless task for Cameron Powrie and Andrew Robinson, who portray him as a young adolescent and as a troubled adult respectively. The problem is mostly one of contrast with the incendiary Myers, comparable to the problem Michael Keaton faced playing Batman to Jack Nicholson&#146;s Joker.

Withdrawn and ruinous it broods in umbra: the immemorial masonry: the towers, the tracts. Is all corroding? No. Through an avenue of spires a zephyr floats; a bird whistles; a freshet bears away from a choked river. Deep in a fist of stone a doll’s hand wriggles, warm rebellious on the frozen palm. A shadow shifts its length. A spider stirs… And darkness winds between the characters.

The Gormenghast books are filled with evocative images and wonderful gothic hyperbole, and this sort of thing is always very tricky to pluck from the mind and place on the screen without the whole thing being a letdown. To the reader, the walls of the castle, glistening and black, stretch infinitely outward and upward; something which is hard to capture even with the best CGI technology (which, by the way, is not quite what we are looking at here). Although it is a far cry from some of the BBC&#146;s quaint, bloodless costume dramas, there is still something very, well, BBC-ish about Gormenghast. Despite the attention to detail, the decadence of the production design and lavishness of the costumes, the whole affair has a certain Doctor Who quality that is very hard to pin down. It may be as simple as the film quality. For all their obvious strengths (the foremost of these, a refreshing lack of Puritanism, being very much on display in Gormenghast), British TV shows are possessed of a certain flatness, a handicam quality so recognizable to viewers of Masterpiece Theater, which can sometimes shatter illusions more easily maintained by the slick, state-of-the-art professionalism of US television.

This small quibble is of little importance, however, and this series is excellent overall. The scenes flow together well and the changes in tone are deftly handled, with special mention to a frantic half hour section in the third episode which hurtles along at a comic pace worthy of the Marx Brothers or Emir Kusterica (Black Cat White Cat, Underground). It is great to see the normally staid BBC venturing out into slightly edgier territory, and this is one gamble that has paid off.