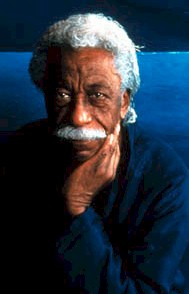 It would be perfectly appropriate to find a picture of Gordon Parks illustrating the entry "Renaissance Man" in any dictionary. Over the course of his 88 years, he’s been a photographer for Life magazine, composer, novelist, poet, painter, lecturer, biographer, co-founder of Essence magazine, and a filmmaker &#150; of such diverse pictures as The Learning Tree (based on his 1969 autobiographical novel) and Shaft. The HBO documentary Half Past Autumn – The Life and Work of Gordon Parks concentrates much more on his works than his life. It’s well worth seeing to view its rich portfolio of his photography and art, but offers little more than a rudimentary sketch of the individual behind them.

Parks started his life in Kansas as the youngest of 15 children. When he was 15, his mother died and Parks was sent to St Paul, Minnesota to live with a married sister and her husband. Parks and his brother-in-law were soon at odds and he was living on the street and working as a railroad waiter. It was while working there that he saw a magazine someone had thrown away &#150; it featured Dorothea Lange photographs of the rural poor. He was transformed by the power of the camera. In 1938, after being inspired by a documentary war film, Parks purchased a used Voigtlander Brilliant in a pawnshop for $7.50. After developing Gordon’s first roll of film, a surprised Kodak sales clerk offered to give him a show at his shop. An artist was born.

Soon he was doing fashion photography, and then working as the first black photographer for the Farm Security Administration, documenting poverty in agricultural areas. Photos from this early era of his career are stunning in their simple power, a trait his work would continue to display. Two years later he was in New York, working for Glamour and Vogue, and in 1948 he went to work for Life magazine, where he would stay for 20 years and establish his national reputation as a photographer whose work combines art and social commentary.

The documentary serves as a brief social history of America as well as a showcase for Parks’ work. The real centerpiece here is Parks’ photography, hundreds of his pictures are shown over the course of the film’s 90 minutes. The film’s structure is simple; most of the narration is handled by Parks himself along with a few other people from his life. Parks is shown as an unassuming man and his life is presented straightforwardly and in chronological order. Significant events are mentioned only offhandedly, and the scarce insights provided depict Parks as a diverse iceberg of a man, leaving one wondering about the 90% of him that the film leaves unexplored. For example – he’s been married and divorced three times, but even the appearance of two of his wives in the documentary provides little to help explain the dynamic in his relationships with them or their reasons for splitting.

Towards the end of the film Parks says, "I’ve known both misery and happiness. I’ve lived in so many different skins. It is not possible for one skin to claim me." It’s an appropriate comment, for Half Past Autumn – The Life and Work of Gordon Parks stays mostly at an epidermal level when examining his personality. It’s a sumptuous feast for the eyes, but never gives one’s mind more than a few tantalizing appetizers to savor.