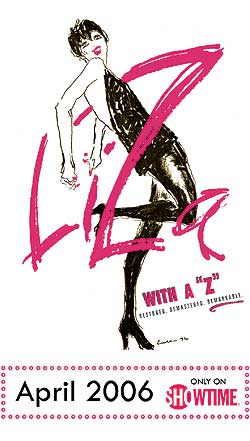 "Liza With a ‘Z’" is the title of a gently amusing autobiographical patter song written for the star by her frequent collaborators Fred Ebb and John Kander. It also serves as the title of a classic live concert staged for television in 1972, a show which garnered multiple Emmy awards and then disappeared, the negative apparently lost for many years. Now rediscovered, restored, and remastered, it is being aired by Showtime and released on DVD. It is nothing less than an hour of unalloyed joy.

Minnelli suffers both the blessings and the curses of being the daughter of the late Judy Garland. The blessings: show business doors were open to her and she inherited some of her mother’s sensational talent. The curses: working as a child performer from age three (almost guaranteed to produce neurosis) and being the daughter of a superstar plagued with addictions and messed up personal relationships, both of which became problems of the daughter as well.

Those who were fans of Garland’s even before Minnelli was born often viewed Minnelli’s career as a capitalization on her mother’s stardom, her performances often utilizing a vocal tremolo like her mother’s, some of the trademark stage movements similar to her mother’s–all having the effect of somewhat obscuring Minnelli’s own genuine talents.

In 1965, at 19, Minnelli won a Tony award as best actress in a musical for a now largely forgotten vehicle, Flora the Red Menace. She subsequently made several films, leading up to playing Sally Bowles in Cabaret, a performance that garnered her an Academy award. There was no denying that Minnelli had arrived as a major talent, independent of her family heritage.

Liza With a ‘Z’ came hot on the heels of Minnelli’s Cabaret success and showcased the entertainer’s multiple talents. With choreography by Bob Fosse, as sleek and stylish today as it was three decades ago, Minnelli surpasses anything that Garland did as a dancer. And if, as a singer, she never quite penetrates the heart’s core as her mother did, she has her own thoroughly satisfying style which can range from the Billy Holiday bluesy "God Bless the Child" to classic belters like "It Was a Good Time" and "My Mammy." Minnelli has a particular affinity for story songs like Aznavour’s "You’ve Let Yourself Go" and the delightfully upbeat Kander and Ebb "Ring Them Bells." And, of course, the show would not be complete without a medley of favorites from Cabaret.

What is especially pleasing after all these years is the 1972 freshness and energy of the star who is more often thought of these days in terms of her later difficulties in life. Smartly outfitted for the show by Halston, she displays energy, verve, and professionalism of the first order. It’s classical Broadway style, crisply directed, every element calculated to bring out the best of the performer at the peak of her powers. Regardless of what followed historically, Liza With an ‘Z’ provides an archival record of a magical moment in what became a problematic career.