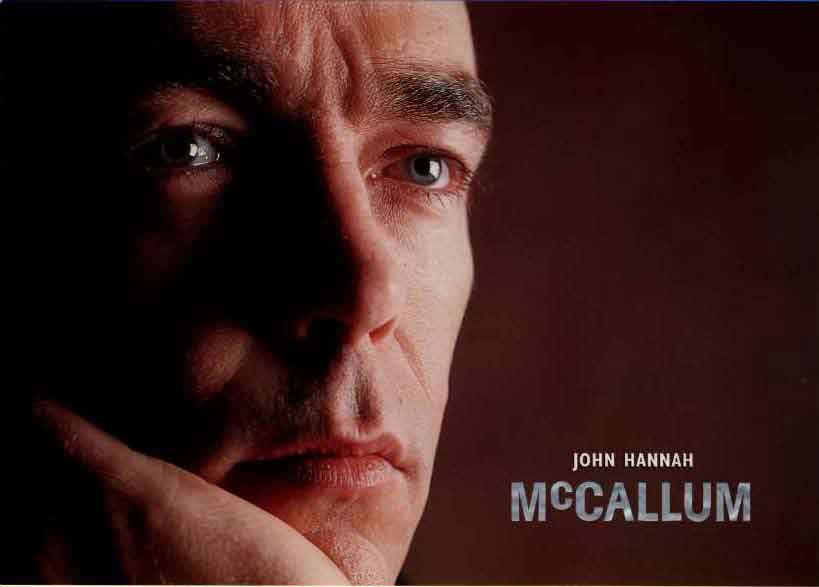 McCallum, the new crime thriller made by Scottish television, is for nice people. There’s only a token flash of sex or violence now and then in the sight of a bruised corpse. Its not big on cool cats like that Scot, James Bond or his glamorous women. It’s not even stylish, unless you count the fact that the hero (John Hannah) wears a black leather jacket and rides a motor bike, picking up on a 1960’s style only to be seen in America nowadays in retro clubs.

The signature tune is a marvelously wounded rendering of the sweet jazz ballad, "Cry Me A River," while the camera pans over the Thames in East London, lit up at night. This still ranks as superior "mood music," but has nothing to do with the program content (regrettably only DJs play the song nowadays on morning shows). The ‘sixties must be longer ago than some of us like to think if it can be evoked in this deft way of a period reference. Not the ‘sixties of Big Chill, but the ‘sixties of post World War II Britain, which was the same on celluloid as the ‘fifties of post World War II Britain, which turned up in a deluge of film and television, which is one reason why this series feels familiar and a bit old fashioned.

The cast is blessedly adult, distinctly over and upward of thirty; some wear suits and ties, skirts and hairdos; and all speak a dense Scottish dialect that may be almost unintelligible to Americans not paying acute attention, even in this heyday of British regional and working class types on film.

Iain McCallum is a forensic pathologist by trade, who varies the formula for doctors involved in crime and detection by thinking backward from the appearance in his morgue of a dead body to how it came to be dead. He’s appealing, a sort of grown up Hugh Grant, and low keyed. It’s plain that his audience will respect his sobriety–although he is young for his position, around thirty-five?– and will like his tact. It shows in his pleasant face, which twitched in Episode Two, when his gorge rose in a hint of disgust at the sight of a mangled corpse. This was as close as he came to a direct expression of sentiment, maybe an expression of moral outrage. His sometimes pursed lip and dead-on stare must convey sensitivity, endurance, doubt or faith, all the right heroic qualities. In a word, he’s serious veering toward solemn. The Scots’ reputation for dourness may lead to type casting; but this lead Scot could do with a dash of wit, even for his Scottish audience.

The audience ideally will be fans of who-dun-its in the Sherlock Holmes manner. McCallum solves cases by patiently accumulating scientific detail, sometimes about the victim’s family, more often through his forensic analyses of inert clues explained to the cops (You almost can hear: "that trace of dust, you see Watson, on the victim’s trouser cuffs…"). The head cop is DI Bracken, a tough, unyielding man with a square jaw played by Gerard Murphy. He too respects facts about how-dun-it, so he’s on McCallum’s side, though they mistrust each others motives and methods. &#145;Twas ever thus between cops and amateur detectives.

McCallum has his Watson, the attractive, no nonsense blonde Dr. Angela Moloney (Zara Turner), not working for him but along side him at the hospital. There is one three minute segment, out of four half-hour episodes, when they dash through the empty night streets on his bike, yelling in sheer exuberance then rolling together for sex in the same spirit. There is some life here after all.

So, what’s good about the series is what’s bad about it. In the second program, "Sac-rifice" in three parts, all the characters have motives and conflicting emotions, which add up to far too many for the detective genre. McCallum’s case this time involves a Jewish baker whose death looks like a suicide until each of his surviving family members begin to show (and tell) their tales. The program takes on the leisurely pace and looks of a family drama, more Masterpiece Theater than "crime thriller," as the show announces itself. Episodes, too, are linear, maintaining a continuity in the narrative that makes them blissfully easy to follow without repeats and recapitulations at the beginnings of each. Ultimately, however, the second and third set of episodes feel tame.

There’s a swell shot, maybe two minutes long, of the red ribs on a carousel in a fair ground at night casting a blue light on McCallum and his mate Bracken. They’re following up on something mysterious. There’s a fabulous few seconds of a wild tango in a night club from a story line that must have been cut. But the first episode still stands out for those terrifying knives and scalpels wielded by a deadpan McCallum performing an autopsy. Now there was a fine, ghoulish chill.