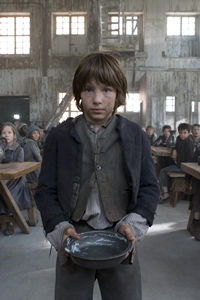 A new and modern retelling of Dickens’ Oliver Twist, the much-loved tale of the poor orphan who falls in with audacious young pickpockets and diabolical villains, will be aired on PBS’ Masterpiece Classics in two parts on Sundays, February 15, 2009 and February 22, 2009.

Oliver Twist is the first of four Dickens adaptations in Masterpiece Classic’s, The Tales of Charles Dickens. It will be followed in March by David Copperfield (an encore presentation starring Harry Potter’s Daniel Radcliffe in his debut film role), Andrew Davies’ Little Dorrit (March 29 through April 26), and The Old Curiosity Shop starring Sir Derek Jacobi (May 3).

One may ask, “Why should I watch another adaptation of Oliver Twist when so many already exist? Some of the better ones are:

The answer: this new version is wonderful. Combining a modern edge that sets it apart from previous adaptations with a spectacular cast led by adorable newcomer William Miller as Oliver, Masterpiece Classic’s Oliver Twist is a pleasure to watch.

I was entranced by the vivid, nuanced portrayal of the characters, especially since it’s easy to revert to stereotypes in Oliver Twist. Despite my familiarity with the plot, this adaptation seemed inventive and intense—no sugarcoating here. The direction, settings and all production values were first rate.

The happy conclusion to Oliver’s tale of deprivation and danger leaves us with a revitalized appreciation of Dickens’ storytelling genius and his biting social commentary.

The production begins in 1837, when Oliver’s unmarried mother, Agnes, dies in childbirth. Oliver is sent to the workhouse, then sold into servitude after his famous plea, “Please, sir, I want some more.” He eventually winds up alone in the East End of London.

There, Oliver falls in with Fagin, the adult ringleader of a gang of boy–thieves, played with worldly charm by Timothy Spall (Harry Potter, Sweeney Todd). Fagin is one of Dickens’ most conflicted characters. In the novel and earlier film adaptations, Fagin was played as the devil incarnate. In this retelling, Fagin is more of a Jewish father figure for his young felons who risk their lives on his behalf.

Timothy Spall stated in a recent interview that he and director, Coky Giedroyc, saw Fagin as an exotic outsider, a pariah, an outcast from a better world, a faithful Jew, with a warm, almost motherly affection for his boys.

Edward Fox (Foyle’s War) plays the patrician Mr. Brownlow, the victim of Oliver’s first attempt at pickpocketing, who gives the boy refuge. Morven Christie is Rose, Brownlow’s ethereal and tenderhearted ward, obsessed by the disappearance of her sister, Agnes.

Mr. Bumble, one of Dickens’ most comically quirky characters (Gregor Fisher, Love Actually) is an officious beadle (a very minor parish official), who banishes Oliver from the workhouse. Mrs. Corney (Sarah Lancashire, Wuthering Heights) is the conniving workhouse matron, who sees her main chance in the bachelor Bumble and a secret item of interest to Monks.

The realistic portrayal of the poor in Oliver Twist is partially based on Dickens’ traumatic childhood. At age twelve, Dickens was put to work in a shoe-polish factory at low wages. His father was sent to a debtors’ prison soon after.

While his father was in prison, Charles suffered the indignities of insufficient food, degrading labor, shabby quarters, and the association of rough companions.

Interestingly, a group of British researchers analyzed Oliver Twist’s diet in a study published online on Dec. 17, 2008 in The British Medical Journal. They found that Oliver’s diet of thin gruel as described by Dickens would consist of about 400 calories per day and would cause severe malnutrition and its related diseases. However, in a British text written in 1843 on prescribed workhouse diets, those diets would have supplied 1600 or 1700 calories per day. http://www.bmj.com/cgi/content/full/337/dec17_2/a2722

By the way, this may be a good time to read A Dickens Glossary for American Readers by Fred Levit (Hall Design, Inc. 1996), a comprehensive glossary containing over 2800 entries, including hundreds of quotations, phrases and Briticisms, as well as definitions of words and phrases whose meanings have changed through time or have been lost with vanished technologies.