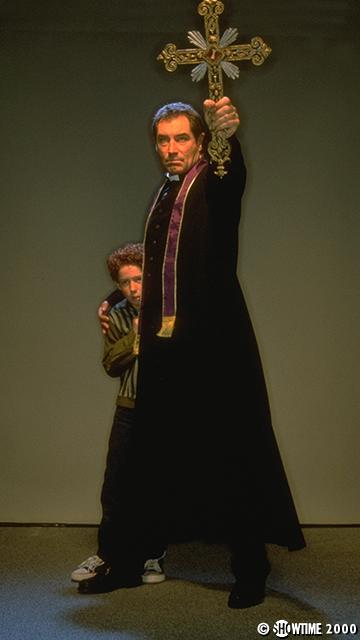 Possessed wants to be The Exorcist‘s docudrama cousin&#151;both films are based on the same case&#151;but lacking the budget, the acting talent, or the screenplay of the earlier film, Possessed winds up becoming one of the funniest movies of the year. The harder it tries to be taken as seriously as it takes itself, the more the viewer is consumed by giddy, disbelieving laughter. Long before the concluding exorcism scene (which plays like a bad Gothic rock video), the movie’s already slid irretrievably into self-parody, and there’s no recovery.

Timothy Dalton plays Father William Bowden, the priest in charge of the exorcism and a man with "demons" of his own to battle&#151;the standard sweaty nightmares and drinking. He’s also got a temper, at one point attacking a mob of racist protesters with a twelve-letter word more suited to Samuel L. Jackson than a fifties Catholic priest, even one who’s halfway to AA. Dalton plays Bowden like he’s auditioning for a community-theater adaptation of Graham Greene’s The Power And The Glory, and the results go beyond camp&#151;watching his contortions, hearing the stilted dialogue he’s been handed by screenwriters Stephen E. DeSouza (who also directed) and Michael Lazarou, you just feel embarrassed for him. Equally overwrought is Piper Laurie’s Aunt Hanna, a vaguely Eastern European woman who serves only to confuse the storyline. She&#146;s shown teaching young Robbie Mannheim (the possessed boy, played by Jonathan Malen) about Ouija boards and the like, but it’s not her spirit that’s possessing him, is it? The screenplay toys with this idea for a while, seeming to imply such, but eventually the whole idea of Aunt Hanna is abandoned utterly, in favor of the above-mentioned exorcism scene, which takes place (no, really) in a church insane asylum at midnight, as a wild rainstorm beats down. The whole thing is like a collaboration between Pedro Almodovar and John Waters, from a screenplay by Ed Wood, Jr.

Another place in which Possessed utterly fails is its inability to make the possessed child even slightly sympathetic. Jonathan Malen, the young actor in question, reminds the viewer of no one as much as Michael Oliver ("Junior" in the Problem Child movies). The viewer is hard-pressed to care whether this whiny, redheaded brat escapes the clutches of Satan or not. Christopher Plummer reprises his Insider portrayal of Mike Wallace, playing Archbishop Hume as a company man eager to "move the Catholic Church into the 20th Century." His few scenes consist primarily of warning Dalton, and Henry Czerny as the basically extraneous Father McBride, not to make waves. If this were a cop movie, he’d be pounding the desk and threatening both men with being taken off the case.

This could have been a good movie. Stripped of its overwrought pretensions, and played naturalistically, it could have been genuinely frightening. But everyone involved has larded the screenplay and the screen with so many utterly predictable cliches that the only possible response is helpless, scornful laughter. File Possessed next to Angel Heart, Stigmata and End Of Days&#151;movies so bad they make evil seem like a boring joke with no punch line.