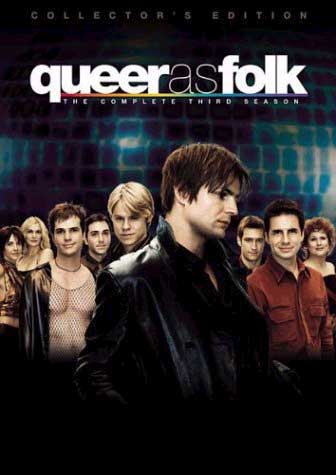 from the Metropolitan Museum of Art

The Americanization of the groundbreaking British series, Queer as Folk, has been a hit and miss affair. Desperate to stay at the head of the pack in "gay" television, Showtime&#146;s third season of Queer as Folk ended with a boiling over cliffhanger.

Michael Novotny (Hal Sparks), is in yet another "becoming a man" scenario that has him on the lam with teenage hustler runaway Hunter (Harris Allen).The boy&#146;s mother is accusing Michael and his lover Ben (Robert Gant) of keeping the boy for sex.Holy pedophilia, Batboy!Gay fantasiasand politics drive this series to unexpected heights and sometimes sink it to wooden predictability. Never mind that its depiction of working class gay life in Pittsburgh PA often looks like a constant orgy of flesh, booze and drugs.This series also is scant on character diversity within the gay community and heterosexuals are most often cast as antigay villains.

As the fourth season begins, the complete third season has been newly released on DVD. Aside from the episodes themselves, it&#146;s heavy with product tie-ins and "extras" for the obsessed fans who subscribe to the cable network.It is Showtime&#146;s biggest hit, so this package is padded with various behind the scenes "exclusives." The outtakes are fun, but really consist only of actors flubbing lines.

There&#146;s a "day in the life" of some of the actors’ rather boring lives and they seem reluctantly to go along with the intrusions. The most interesting of these features is a cast sit-down commentary, discussing the last episode that was aired.But, the two bad boy stars, Gale Harold and Randy Harrison, who play the sexually charged couple Brian Kinney and Justin Taylor, are no shows.The voiceover commentary by the rest, though, especially that of producers Ron Cowen and Dan Lipman, is fascinating.

In a year when gay civil rights landed on the front pages of newspapers and broadcast news, this show is smartly on top of all of the issues.But instead of using that as a backdrop for the character driven plotlines the show was built on, episode after episode now preaches to the queer choir. Kinney again rescues gay life on Liberty Avenue from the forces that want to use it as a political dividing line.

&#147;It used to be such a magical kingdom, full of sprites and fairies,&#148; says Kinney.Later he consoles the spurned Emmett, who has just been kicked out by his boyfriend Ted Schmidt (Scott Lowell), the uber-nerd turned crystal sex queen.Although QAF has tackled big issues, it all comes back to the sex lives of the main characters, which turns it into gay soap opera.

The storyline follows a mayoral candidate, Jim Stockwell (David Gianopoulos), exposed in the cover-up of a murdered male hustler by a city police officer.Michael&#146;s wisecracking mom, Debbie (Sharon Gless), is dating PPD&#146;s head detective until he bows to pressure from Stockwell to make it a cold case.

Kinney&#146;s mythic position as Lord of the Cock Rings is getting old, but Harold has the right swagger and screen presence to keep it interesting.Gless, the only non-gay character among the leads, reprises her sleuthing from Cagney and Lacy days as she investigates the murder of Jason Kemp (a.k.a. Dumpster Boy) from her lunch counter.

From the start, QAF featured full-frontal nudity for lesbians and gay walk-ons, but the lead men only do discrete front shots. It’s a positive that the sex scenes go for intimacy past graphic sex, but why is there a caste system for degrees of nakedness exposed?A lot of these shots become gratuitous anyway, even when it&#146;s supposed to be funny.

Cowen and Lipman are producing this hit series for the long haul so it was inevitable that it would come down with a bout of series-itis. Fortunately, QAF’s able cast is smart enough to keep these characters breathing past creaky plot machinations.