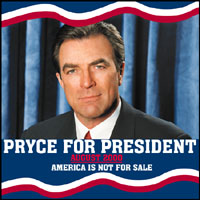 The night before the Democratic Party convenes to nominate its candidates for president and vice president, TNT unveils an original movie, Running Mates, a story about just such a convention placed in the very same Staples Center in Los Angeles where the Democrats will gather. Since the presidential nomination is locked up, the only excitement expected at the real convention might have been the distinctly anticlimatic question of who might cool his or her heels as vice president for the next four years. Even that suspense has been removed now, albeit with a courageous choice by Mr. Gore for his running mate. NBC has announced curtailed convention coverage, presumably because the event looks to be a big yawn, so TNT seems to have the right idea here – to capture viewers’ attention with a behind the scenes look at a fictional convention, one that also has a clinched presidential candidate. The politics revolve around who will get the nod for VP.

Running Matesuses two techniques to juice up the agenda and differentiate itself from the real life coverage. One is to create dramatic tension by showing the big money interests challenge the integrity of the presidential candidate, offering $100 million to get their man into the VP slot. The audacity of the offer by the icy power brokers tips the theme of the movie: "The influence peddlers are buying America and we, the people, will have none of it!" But don’t expect clever or subtle exploration of the sinister manipulation of power (as so well done on a more intimate scale in last year’s The Insider). On the political level, whatever the merit of the theme, it is presented here on the most basic propagandistic level.

Technique two in Running Mates‘ strategy to entertain is tittilation. The candidate, Senator Pryce (Tom Selleck), has bedded down, at one time or another, his campaign manager (Laura Linney), a fatuous Hollywood PR agent working for the campaign (Teri Hatcher), another Senator’s wife (Faye Dunaway), and his own legal spouse (Nancy Travis). (It appears that endowing big political sticks with overactive physiological sticks is the entertainment legacy bequeathed by the current administration in Washington.)

Straddling a line between satirical comedy and political soapbox, Running Mates ends up heavier on the soap and weak on the comedy. The attempts at humor fall flat so much of the time that when a good line comes along, it succeeds only in highlighting how unfunny the rest of it is. The characterizations are of daytime soap quality, elevated to higher, but still empty, drama by some scenery-chewing overacting, especially by Dunaway and Hatcher. Selleck and Travis manage to maintain their dignity, but every other major character – even idealistic Linney – is an essentially undifferentiated stereotype – sotted with ambition, caustic of tone.

Situation after situation is predictable, if not hackneyed, in this first screenplay by Claudia Salter: the political wife protecting her daughter from being used as a public relations tool; the confrontation between the over-stepping campaign manager and her boss, the Senator; the wife’s pep talk to the discouraged candidate; the female manager following an elusive politician into the men’s room. It’s all vaguely familiar – we’ve been there before. And a scene of the four women in a bathroom together, an homage to George Cukor’s classic, The Women, aims for the tone of bitchiness without ever finding the wit of the original.

Director Ron Lagomarsino, a graduate of daytime soaps (One Life to Live) and more sophisticated primetime soaps (thirtysomething; Picket Fences), keeps the pacing lively and, with generous production values, captures the hoopla of convention time. The thrill of the moment of nomination is conveyed, even while everyone knows it is a manufactured moment.

It isn’t a dull movie, just a hollow one that ends up selling its message short.

Still, Running Mates is doubtlessly more entertaining than the Democrats – or the Republicans – will be in August.

(4377)
$8.98 (as of January 21, 2021 - More infoProduct prices and availability are accurate as of the date/time indicated and are subject to change. Any price and availability information displayed on [relevant Amazon Site(s), as applicable] at the time of purchase will apply to the purchase of this product.)

(2286)
$3.15 (as of January 21, 2021 - More infoProduct prices and availability are accurate as of the date/time indicated and are subject to change. Any price and availability information displayed on [relevant Amazon Site(s), as applicable] at the time of purchase will apply to the purchase of this product.)

(12904)
$48.99 (as of January 21, 2021 - More infoProduct prices and availability are accurate as of the date/time indicated and are subject to change. Any price and availability information displayed on [relevant Amazon Site(s), as applicable] at the time of purchase will apply to the purchase of this product.)
related posts