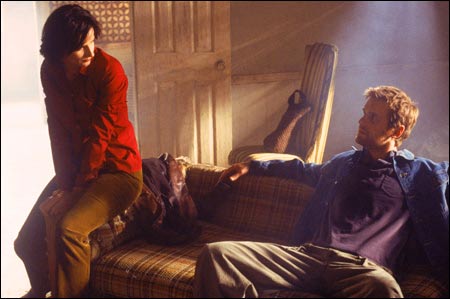 Unlike The Sopranos, to which Six Feet Under tends to be unfavorably compared, HBO&#146;s new series about the lives and loves&#151;and deaths&#151;of a southern California family of undertakers treats its audience to a cross-section of contemporary American types and attitudes. Viewers cannot miss the imprint of Alan Ball, the man who wrote American Beauty. The tone, the characters, the humor, the tragedy, the surrealistic qualities of everyday life all balance uneasily between the sublime and the banal of real people&#146;s lives. We know these characters; sometimes we are one or another of these characters. The only comparable take that comes to mind is the &#147;Death&#148; segment of Absolutely Fabulous, wherein the corpse of Edwina Monsoon&#146;s recently deceased father ("He&#146;s dead &#150; he looks … totally out of it.&#148;) raises the all-important aesthetic question, &#147;Yes, but is it Art?&#148;

No other society and no other era has so distanced itself from the ubiquity of death, nor transformed it into a source of high-margin profit, nor so pseudo-mystified it, that grief itself often seems an embarrassing and shameful mental disorder. The story-line of the Six Feet Under pilot is interspersed with several send-ups, mock-commercials hawking products to enhance the funeral performance (embalming fluid as suntan lotion, funeral coaches as quasi-1950s height of elegant status, or funeral supplies as a Gap commercial dance performance). The pilot story centers on the unexpected death of Nathaniel Fisher (the elder) in a fatal accident, totaling the new family hearse in a broadside collision with a city bus. The viewer is left cringing as much at the loss of the magnificent vehicle as at the death of some guy we know nothing about yet. He comes back to his family, almost immediately, reified as a wisdom-dispensing ghost.

In American culture it is virtually taboo to "speak ill of the dead," and the sort of psychological ambiguity Ball plays with emerges as the viewer witnesses the paterfamilias revisiting each of his surviving family members. Was he in life wise, careless, a jerk, domineering, reformed hell-raiser, as he appears to be in turns to individual family members? Or are they reinventing the man to suit how they would like to remember him?

The overtly sardonic humor fades, alas, as the series unfolds. Death brackets the soap opera contents of each show&#151;the opening scene presents a typically untypical death (so far no one has died of old age) and each segment closes by fading to white signifying, perhaps, the soul of each segment&#146;s unexpected death crossing over and entering the light. After Nathaniel pays a visit to each of his surviving family members, everyone is back in the midst of their messy and self-inscrutable lives.

Since sex&#151;and romantic love&#151;are mainstays of any contemporary narrative, Ball quickly hones in on the primary relationship, between Nate Fisher (the younger), prodigal son returned from his extended adolescent Seattle lifestyle, and his quirky (selfish? psychopathic? lost little girl?) zipless fuck, Brenda Chenowith, living proof of the fallacy of Skinnerian behaviorism. (Her wealthy psychiatrist parents are as manipulative and smug as they come.) Peter Krause (who plays Nate) and Rachel Griffiths (who plays Brenda) are eye-candy enough to carry the burden of all of the explicit sex scenes.

But, never you fear, in this Freudian labyrinth, even Mom (Ruth Fisher, played by Frances Conroy) in her oddly Puritanical-Midwestern way had been cuckolding her husband with a tweedy and willowy (heterosexual) hair-dresser. Dark-haired, anal-retentive, and deeply closeted brother David (played by Michael C. Hall) is seeing a black cop (Keith, played by soap-opera heart-throb Matthew St. Patrick), who is endlessly patient and nurturing (racial role reversal) in helping David find his way into the light of gay love.

And then there&#146;s Claire (played by Lauren Ambrose), the one real &#147;live wire&#148; in the lot, the only family member who is honest enough to know she is messed up, and in love with life enough to rush in where other Fishers fear to tread. She inherits the old family hearse, redone in post-hippie detail. She steals an amputated foot to attain justice the only way she knows how against an erstwhile boyfriend who has branded her a slut for sucking his big toe. (Apparently, all the girls do this, but only Claire was made to pay the price.) She is suspected of setting fire to the property across the street from their funeral home.

Did she do it? Rival Kroehner Service Corporation has been turning up in each installment, the Evil Empire incarnate, using every trick in the Devil&#146;s bag to seduce, cajole, threaten, or otherwise attempt to force the Fishers out of business. While out on an Upward-Bound kind of survivalist training trip, Claire&#146;s nemesis-turned-confidante suggests otherwise.

The promise of a complex archetypal subtext gives hope that Ball&#146;s current series (renewed for a second season) will live on as a classic.