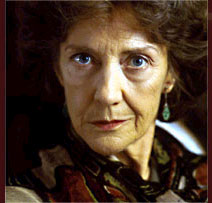 Our review of the New York stage production of Talking Heads

Round Bottom with Lid and Handle

Mostly, what appears on television are movies (or movie-like productions) shrunk down to fit the not-as-small-as-they-they-used-to-be home screens. The sweep is lost, the grand scale of the big silver screen miniaturized. Bigger than life is re-scaled to ordinary.

When theater productions are taped for television, they generally feel artificial and stagy–utterly differentfrom the very same material seen live on stage, where audience experience of theatrical conventions and the magic of the in-person connection easily allow for the suspension of disbelief.

The British playwright Alan Bennett is one of the few who has been able to wed the pleasure of literate theater with the small screen. Talking Heads (the expression used for all those folks seen shoulder-up and speaking at you in TV and movie documentaries) is the title of two series that Bennett has written for television. They are a collection of fictive monologues, the first going back to 1988, acted by luminaries of the British stage and screen. These actors of consummate skill deliver Bennett’s witty and observant characterizations in short engrossing vignettes that treat the viewer as a confidante, resulting in an intimacy ideally suited to TV. They range from hilariously funny to bitingly satirical to poignantly reflective, sometimes all in the same monologue. Never has the medium of television been used to better advantage.

Years ago, the first series ran in full on PBS. Now Masterpiece Theatre offers one segment only from the second series (1998), which raises the question as to why American audiences are deprived of the balance of series two. Ah, the mysteries of media decision making.

Set the VCR to record it, because the one segment here doled out, The Hand of God, is an exquisite gem which will be worth repeated viewing over the years. Eileen Atkins thoroughly inhabits the role of a suburban antique dealer, Celia, a widow, sitting in her shop, surrounded by her stock-in-trade. She is disdainful of the inexperienced casual shoppers who come by and she is a snob about her own knowledgeability both of antiques and the tricks of the trade of buying and selling. Her specialty is "good cottage furniture" and there are things she would never disdain to carry. "Teddy bears are a minefield," she sniffs.

When an acquaintance, Miss Ventriss, who lives in a 17th century house full of antiques, becomes terminally ill, Celia observes that "the sharks are beginning to gather." What follows, all as she relates it, is rich in plot, irony, and suitable comeuppance as the reward for hypocrisy. Atkins (Vanity Fair, Cold Mountain) not only delivers the lines with thorough verisimilitude, but uses every muscle to convey the attitude behind the words. With refined understatement, she uses a turn of the head, a lift of the brow, a blink, a shrug, a near-sneer–all perfectly attuned to the underlying feelings, both those of which Celia is aware and those that she unknowingly reveals to the viewer. It’s a spectacular miniature, forty minutes of bewitching theater that works perfectly on the television screen.

Masterpiece Theatre fills out its hour with a short oral essay told by Alan Bennett himself about his childhood home. The son of a butcher, he was embarrassed by the accoutrements of his father’s trade. He catalogues the sad collection of bric-a-brac that his mother accumulated, from the somewhat disdainful point of view of the boy growing up in this working class household in Leeds. In the end he acknowledges that the memories of his boyhood embarrassments live on, even when no others are left to remember and he gently rues the depths of his boyhood trivialities. Bennett’s gift for the language is a joy; his ability to draw from descriptions of ordinary day-to-day things the subtleties of human experience is masterly.