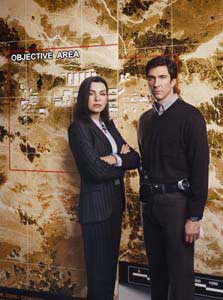 The Grid, a six hour miniseries, is as timely as today’s newspapers. The subject matter of this fictional drama is terrorism and the counter-terrorism efforts of agencies of the United States and British governments–the FBI, the CIA, the NSC, MI5, MI6. Based on the first couple of hours, it might be difficult to keep the agencies and their numerous operatives sorted out, but one thing is made clear: the squabbles and turf wars among U.S. agencies and between the British and the American agencies (which seem not to be exaggerated in view of recent events) let the terrorists run circles around them.

The precipitating event is the accidental release of sarin, a nerve gas, in London, killing more than a dozen people. The intention of the terrorists who botched the job was to release the gas at a conference of Muslims and Jews where there would have been far more victims. In response, National Security Council Deputy Director Maren Jackson (Julianna Margulies) is set up with FBI Special Agent Max Canary (Dylan McDermott) and CIA analyst Raza Michaels (Piter Marek) as a special team, answering only to the director of the NSC, so as to avoid inter-agency friction. But Michaels’ boss at the CIA, Acton Sandman (Tom Skerritt) has no intention of ceding an inch to the inter-agency team. On the British side, the key players are Emily Tuthill (Jemma Redgrave) from MI6 and Derek Jennings (Bernard Hill) from MI5.

But that’s just the half of it. On the terrorist side there’s a one-time Al Qaeda and still militant Muslim, "Mohammed" (Alki David) and his deputy, Dr. Raghid Mutar (Silas Carson), also former Al Qaeda, but now deeply concerned about the violence and death the militants are unleashing. Their differences allow the show to suggest that the terrorists are the extremists of the Muslim world and that not all Muslims endorse the violence. There’s also a wealthy Saudi who’s funding Mohammed’s efforts, an American Muslim from Dearborn, MI, and a Muslim Swiss banker.

The story jumps back and forth between terrorists and counter-terrorists, between the British and the Americans, and, geographically, all over the map–New York, Washington, London, Cairo, Zurich, Kazakhstan, Lagos, Yemen–at a near-dizzying pace. But the broad storyline is kept remarkably clear, and the unfolding events maintain both interest and momentum.

Would that screenwriter Ken Friedman (Cadillac Man) could provide believable dialogue to raise an interesting story above the level of the most ordinary television fare. As it is, the dialogue is so busy dishing out plot that it becomes artificial; people just don’t talk this way. And Margulies’ (Mists of Avalon) stiff delivery of the already creaky lines helps not at all. A skilled actress like Jemma Redgrave (The Acid House) somehow supplies some personality that the script doesn’t provide her; when Redgrave and Margulies share a confrontation scene, the contrast is most unflattering to the latter. Marek, on the other hand, is given a more subtle range to work with. In these early episodes, the Canary role is pretty much sung on one note; his motivation is an obsession with the death of his best friend at the World Trade Center, perhaps complicated with guilt over marrying his late friend’s widow. McDermott (The Practice) is a better actor than these first few hours demonstrate. Maybe that will change in later episodes.

But, then again, maybe not. When a miniseries chooses a canvas as broad as this one, it will likely remain, as it is so far, plot-driven, with characters serving to move the plot forward, on the one hand, and to provide exposition on the political issues, on the other. Fully realized, three dimensional characters may be too much to expect, but imagine how much more effective the drama would be if that were provided as well. Still, on the basis of the first couple of hours, there’s enough interest to stay with the series and see where it goes.