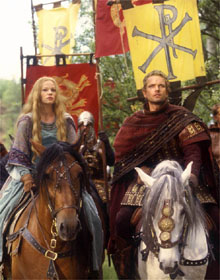 Lovers of Marion Zimmer Bradley&#146;s feminist reimagining of the Arthurian legend, first published in 1982, have no doubt been awaiting this TNT Original with eager anticipation. How could it miss? Acted by an award-winning cast headed by Anjelica Huston, Julianna Margulies, and Joan Allen, filmed on location in Prague, shot by Oscar-winning director of photography Vilmos Zsigmond, The Mists of Avalon, the promotional copy tells us, &#147;takes a mystical journey into the heart and soul of the Arthurian legend.&#148;

That &#147;filmed on location in Prague&#148; is the first tip-off to the essential cheesiness of this production. Prague? As a substitute for seventh-century Britain? A close reading of the production notes at the TNT website reveals that an ice rink in the Czech capital was used as a sound stage for the construction of the castle interiors. So much for Prague.

Bradley&#146;s novel, already a cult cult classic (pun intended), retells the story of Camelot from the perspective of the goddess cult of Avalon, a sort of parallel universe to Celtic England. The priestesses of the old, pagan religion&#151;the cult of the Druids, in short, complete with a miniature Stonehenge&#151;represent the old ways, now in conflict with upstart Christianity. In the traditional legend, Arthur is a Christian king who unites England in the battle against the Saxons. In the book, Arthur is a pagan king, raised by the priestesses, who comes under the influence of his Christian wife Gwynhefar (Guinivere) and is gradually warped toward Christianity.

This is a fine conceit, and may well be true&#151;or at least as true as the more traditional story of Arthur, who for all we know never existed. But this four-hour TNT movie, while claiming to retell the story &#147;from the woman&#146;s point of view&#148; and starring well-known Hollywood actresses opposite thoroughly unmemorable British actors (with the single exception of Hans Matheson, about whom more later), serves up battles that appear only tangentially in the book, presumably for the gratification of viewers who won&#146;t be satisfied without the requisite dose of blood and guts and male bonding. This is television, after all.

So, the women&#146;s story, at least as it appears in this TNT retelling: Three sister priestesses hang out in Avalon. The oldest sister and boss priestess, Viviane, who runs things with occasional assistance from a doddering Merlin, is played by a vaguely imperious Anjelica Huston, arguably the least mystical actress around. Joan Allen plays the middle sister and villainous priestess, Morgause, obviously enjoying the opportunity to kick up her heels in an unsaintly role but providing little insight into the character. The youngest sister and most victimized priestess, Igraine, is played by Caroline Goodall in what is by far the best performance of the lot, but Goodall is British and unknown to American audiences and therefore disappears into the supporting cast.

Julianna Margulies uses her husky voice to good effect in the voiceovers and does a creditable job in the lead role. She plays the ill-fated priestess Morgaine (the evil temptress Morgan Le Fey in the traditional tale), Igraine&#146;s daughter, whose destiny it is to have sex, unknowingly, with her half-brother Arthur in a pagan fertility rite, resulting in a son, Mordred, whose fate it will be to kill his father in battle and&#151;well, you know the story. Gwynhefar runs off with Lancelot (who&#146;s Arthur&#146;s cousin, by the way, as is Gawain), Arthur is betrayed by Mordred, Camelot dies, Christianity triumphs over paganism, and the Saxons beat up everybody in sight.

The adult Mordred is portrayed in Part II by the 25-year-old Scottish actor Hans Matheson, who promptly walks off with the show. Matheson actually looks as though he could be Margulies&#146;s son&#151;black curly hair, clear eyes, and those flat Slavic-looking cheekbones&#151;and he acts up a storm, a welcome relief after the wimpiest Arthur in memory and a Pierce Brosnan lookalike as Lancelot. Mordred, as Matheson plays him, is charismatic and conflicted&#151;just what we want from the bastard son of an incestuous coupling&#151;with several genuinely affecting scenes as he works out his love-hate relationship with his father. On the other hand, he unbalances the production, which is, after all, supposed to be about the women. Tough.

As for the book&#146;s religious themes, this made-for-TV version of the Avalon tale mentions them as seldom as possible, offering up the irreducible minimum to get the story told. The priestesses in charge of the goddess cult are herbalists and healers who occasionally indulge in a little magic; Christianity is, well, Christianity. Just to make sure that no viewer&#146;s belief system comes into question, Merlin gets to say &#147;I think the goddess lives in our humanity and not anywhere else&#148; on his deathbed, Lancelot comforts a guilt-ridden Gwynhefar with &#147;Would it not be a comfort to believe that we create our own heavens and hells,&#148; and Arthur dies with &#147;Our father in heaven, our mother the earth, soon I shall be taken into your house&#148; on his lips.

The production values (&#147;shot on location in Prague,&#148; remember) range from mediocre (knee-high acres of the legendary mists) to ludicrous (a fertility rite with yip-yipping animal-head dancers straight out of Hollywood&#146;s standard depiction of rioting redskins). Camelot is your basic matte castle, Avalon (on the rare occasion when the mists part) is a column-faced cliff dwelling&#151;as though the Anasazi had been working on the Parthenon&#151;and the costumes are standard-issue mystical medieval crossed with grime and dirty hair to remind us that we&#146;re in the Dark Ages rather than the High Middle. There&#146;s also an inexplicable Hare Krishna look to some of the Avalon acolytes, bald heads and all.

Better you should curl up in bed with The Once and Future King.