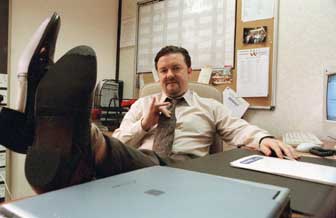 The British series The Office returns to BBC America with six new episodes in its second season. Far from losing any of its edge, this brainchild of Ricky Gervais and Stephen Merchant is nastier than ever. A wickedly written, expertly acted take on self-deceptions born of class envy and sexual anxiety, and set in a sterile modern workplace, it&#146;s a screamingly funny and often ferociously dark work that refuses to deal in easy answers or happy endings. For anyone who&#146;s had it with the bland sentimentality of so-called "heartwarming" sitcoms, The Office is most appealing when it&#146;s at its most appalling.

As recounted in Ben Stephens&#146; review of the first season, The Office takes place in the depressingly gray branch office of a London area paper merchant. David Brent (Gervais), the rotund office manager whose desperate congeniality barely masks a seething hostility, is still force-feeding himself with delusions of his own grandeur. Sales rep Tim Canterbury (Martin Freeman) continues his feud with the boot-licking Gareth (Mackenzie Crook) even as a recent promotion is causing him to take a high hand with Dawn (Lucy Davis), the receptionist with whom his stop-and-go flirtation had been the office&#146;s one healthy sign of life.

Season Two picks up just as the promised merger of the Slough and Swindon branches is taking place. Neil Godman (Patrick Baladi), David&#146;s previous opposite number, has suddenly become his boss, and to rub salt in the wound, Neil is everything that David is dying to be: handsome, athletic, and&#151;above all&#151;effortlessly popular. In one of the subtle, thought-out touches that characterizes The Office, Neil&#146;s incoming staff is just a shade more worldly and attractive than the drab and doughy Slough crew. The new group includes a disabled woman and a wryly aware black man who become instant recipients of David&#146;s special brand of "equal treatment," as well as the nubile girl-woman Rachel (Stacey Roca), whose arrival throws some curves into Tim&#146;s relationships with both Dawn and Gareth. As always, the grotesque Finchy (Ralph Ineson) is doled out in rations calculated to mesmerize us with his loathsomeness yet stop us just short of launching our TV sets out the window.

But center stage is firmly occupied by David Brent, as only befits one of the great comic inventions of our time. Gervais and Merchant pull off a wild balancing act, pushing our feelings about the Brentmeister back and forth without ever quite asking for our full-bore pity or hatred. At points Gervais&#146; willingness to use his roly-poly body and nervous eunuch&#146;s giggle for our amusement (or revulsion) soars to levels of such fearless largesse that his professional generosity&#151;"giving laughter," as Brent would put it&#151;verges on the masochistic. Gervais has announced that, except for a single Christmas party episode, we have now reached the end of The Office. This sounds like a wise decision, for not only does it avoid the possibility of the show&#146;s becoming diluted by superfluous storylines, it may let us see him in other roles without the ghost of David Brent breathing too hotly down his neck.

The worst thing one can say about this season is that its "mockumentary" style doesn&#146;t always show the lightest touch: the camera zooms in on the characters with a little too much emphasis in a couple of places, and a shot or two of Dawn eyeing Tim from afar should have been left on the cutting-room floor. (When their romantic feelings for each other are finally brought into the light, it&#146;s done in a way that&#146;s believable, satisfying, and&#151;well, we&#146;ll let you supply the final adjective.) The odd thing about these episodes is that tawdry as some of their goings-on are&#151;honestly, you won&#146;t believe what Finchy does with a clown-nose on Comic Relief Day&#151;The Office never slides into misanthropy or despair. The employees of Wernham Hogg stir too much recognition in us for that to happen, so that a show which constantly tests our gag-reflex ultimately makes us wonder how we&#146;re seen by those around us. That cell-phone ringing monotonously in the background tolls for thee.