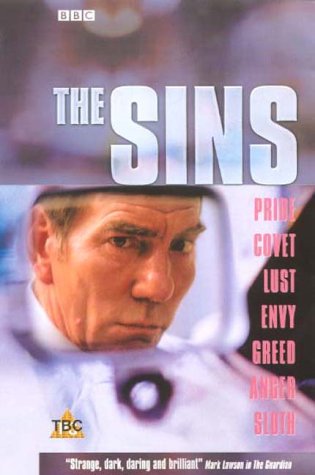 A new series of dramas by BBC America called The Sins turns its back on the bad, old underworld of crime and punishment and attends to the ills of the spirit. In the first episode, "Pride," prison doors open to release the working class hero, Len Green (Pete Postlethwaite), into a brave new world. He has served his sentence for robbery and now sets out with great expectations&#150;the script is full of literary allusions&#150;for going straight. At the surprise party welcoming him home, he stuns family and friends by announcing he&#146;s "going middle class," retiring from the old life "on the rob" as a successful thief. His wife Gloria (Geraldine James) protests and goes on protesting the following morning while he "wallows," as he puts it, in his first private bath in four and one half years. How does he expect her to live, she demands indignantly&#150;she&#146;s dressed, coifed, and well adjusted to her pretensions, including their minor mansion in the suburbs. Green had to fight off attack dogs to get into the house, a nice visual cue to who&#146;s the outsider in this tale. Nobody understands the poor man. His uncle (Frank Finlay), owner of a funeral parlor, needs to explain Len Green&#146;s incomprehensible decision to his wife.

How a new audience will accept the moral premise of an ex-con determined to be upright in a wholly corrupt world will be interesting to see. Green&#146;s accent would have presented a tall enough barrier to his upward mobility in the England of a generation ago. But now dialects are as popular in British film as ethnicity in American, and working class is part of the package. In a quietly hilarious scene, Green fails to persuade an employment agency to find him "a middle class, middle income, middle position." He&#146;s entitled to extra consideration as an ex-con, he says, before stalking out furiously.

Still, it&#146;s not his prison record that jeopardizes his daydream of financial stability so much as the fact that he has worked only four out of thirty seven years. His qualifications do not quite match his desires. He indignantly refuses the uncle&#146;s offer of a job in the funeral trade as far beneath his worth. It&#146;s a great metaphor, the dead body business, and he does eventually accept the job of undertaker. At first though, he intends to better himself, he says in his big speech. He protests that he came to his uncle for advice not a hand-out. Prison has not damaged his sense of self esteem, a usual psychological state of affairs according to his probation officer. To the contrary, Green&#146;s arrogance in the episode on Pride foretells a coming "fall."

Yet it never comes. Nothing much happens at all. Episode One sets up the hero&#146;s circumstances, in a rather leisurely way, for the next sin, "Envy," which looks far deadlier in the stained glass windows of almost any church. The installment presents more in the daily life of this simple guy who&#146;s changing his M.O. His worst sin, almost incidental, shows him competing in the gym with younger men and keeling over as a result. He also tries to make a pal of his daughter&#146;s boyfriend. For a few minutes, she is outraged at taking second place in her father&#146;s notice, especially as she&#146;s pregnant. Mom gives her a hug and the crisis passes–a family problem; low keyed; British style.

Green is getting the hang of starting over without returning magically to youth and vigor. Pete Postlethwaight&#146;s beat-up, rubber face can show a hundred moods–it&#146;s an actor&#146;s dream asset–but he is overqualified for this script, even at its wittiest. For instance, we gather that the hero must have had plenty of time to read in prison, or else he has a remarkably tenacious memory for his schoolboy literary homework. His talk falls into Dickens, Shakespeare, a few other of the greats with easy familiarity. "Some are born to a life of crime," he explains with dead seriousness at one point, "some achieve it, and some have it thrust upon them."

The latter is indeed Len Green&#146;s plight. In Episode One, a pal gives him a lift in a big, flashy red car that turns out to be the getaway car in a robbery. As a police car siren starts up behind them Postlethwaite first registers panic, then something like an epiphany: he sees he will have to fight to remain out of prison. It&#146;s a switch. He&#146;s appealing and we want him to win out over the odds against him–not too great thus far. Single character tales usually put an unchanging hero through a series of exciting adventures, and this is likely to be the format for the show. These sins, nevertheless, are so venial, so tame, they barely command attention, much less "dare damnation." Green&#146;s sins may bite at his spirit, but not visibly, and film means pictures. Otherwise, while audiences may not identify directly with an ex-con, a character victimized by his past can be a sure winner. Indeed, in our cultural climate of "no fault" sin, victim psychology may be the strongest suit to play. Nevertheless, the programs thus far miss their opportunities. Also, a few laughs would not have hurt.