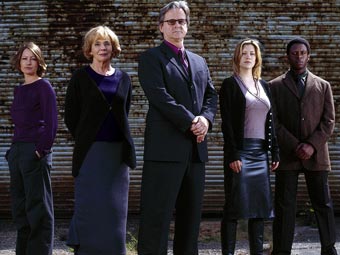 If the initial episodes truly represent this new series of detective mysteries from BBC America, Waking The Dead will appeal to wide audiences, enthrall afficionados of the genre, and earn astronomically high ratings. The startling title says it all for irony and wit, qualities not usually associated with television drama.

The first episode looks wonderful. The visuals hold enough interest for a feature film&#150;the editing and camera work are that fine. And the crosscutting between settings, outdoor (London and suburbs) with indoor (offices and cars), keep up a smart pace while easily advancing the tight plot. Every detective program must include events that build up the type–travel scenes to lay out relevant territory; the hero researching obscure data; reports on the results of investigations; a few similarly formulaic events that might conceivably cause tedium. No such trouble crops up here. Revisiting the crime scene in this case brings the viewer, at the very opening, to a massacre in the streets seven years earlier shown from the point of view of a sniper on a rooftop. The bloody moment generates shock, confusion, and menace as distant bodies topple to the sound of gunfire. The shooter, Carl Mackenzie (Sean Pertwee), was convicted and is serving time. But the past refuses to stay buried, the inspired point for the series.

The script is considerably more intelligent than the usual run of programs about cops and crime. The dialogue is literate without being showy, exceedingly well written without calling attention to itself.In this respect alone, the quality of the first episodes ranks high indeed. The cost of excellence, however, subtracts a little from the vital ingredient of danger. The cops talk a lot. Many long speeches of exposition inevitably reduce the pace of action and tension between good guys and bad. Therein, after all, lies the essence of drama. Keeping a taut balance of elements could be a recurring problem; the show&#146;s heroes, after all, are cold case investigators whose adversaries are likely to be dead. In fact, the mass murderer doing time, Carl Mackenzie, has won his right to appeal, which persuades the Cold-Case Squad to reopen the investigation. Their chief, Inspector Boyd, is reluctant at first, since one of the victims was a close friend. His murder haunts Boyd, replays in his mind as an ice blue flashback that repeats throughout the episode.

The exceptionally fine actors bring a fresh energy and spirit to their roles. Trevor Eve (Possession, David Copperfield) plays the thoughtful hero, Detective Inspector Peter Boyd, a handsome, middle aged loner reminiscent in looks and style of John Thaw&#146;s Inspector Morse. Call him Morse without Mozart. Like Morse, he projects total, altruistic commitment to the cause of justice. Boyd, too, can be quick tempered and irritable, though he did smile once, a little, on unexpectedly facing a pretty woman in a doorway. It lent a tiny frisson of sex to his otherwise cerebral stance.

Given, super detectives respect facts and rely on intuition. They also possess sensitive antennae that vibrate at any hint of lies, phoniness or nonsense. As such ideal traits make for a nearly inhuman heroism, their creators give him a minor flaw, the moral equivalent of a weakness for chocolate. Or Guiness. But if Peter Boyd has a quirk, it&#146;s not yet apparent. The hint of a suppressed motive that might interfere with his cool headed reasoning comes at the very end of episode two, when he pockets the tape of an interviewjust held with the chief suspect instead of turning it over to department files.

His partner, the good looking Dr. Grace Foley (Sue Johnston), sees the deed and registers surprise, which puts her one up in integrity. She&#146;s the psychologist on the team, concerned with probing human motive, while he, theoretically, does the heavy thinking. Johnston (My Uncle Silas) will please women viewers accustomed to seeing attractive women over forty in ancillary rather than key roles. In this program, her maturity inspires trust and credibility, high ranking qualities of the brainy people in a detective story. Maybe Diana Rigg&#146;s Mrs. Bradley paved the way for the type.

High praise goes to the person who dreamed up the program&#146;s book and players. The team includes five experts in forensic science, psychological profiling, and police detection. They all wear white coats when in a laboratory or gazing at a corpse&#150;very efficient these types and not a bit squeamish. If the style of the early episodes has one drawback, it may be an ounce of &#145;much-ness&#146; for a television venue. Occasionally the packed dialogue becomes a bit too complex to follow, minute by minute. The information conveyed matters, while dialogue itself performs a number of other functions, including a chance for Boyd to express himself passionately. At one moment when in that state called high dudgeon, racing through many, many dense lines, he looked nearly apoplectic and might have popped right out of his purple collar and tie. (The men wear suits with dark shirts; the Superintendent off in the far distance wears white shirts; the young women have the requisite long, straggly hair.)

Put differently, the whole might have benefited from a bit more action&#150;not necessarily car chases–and a few more flashes of wit to keep it in the high register set by the classy characters. Of course, the entire team commands far more interest than the events they deal with; &#145;twas ever thus in the star system on which a series depends. But these are minor cavils over details that may have changed already in subsequent episodes. The only technical obstacle to an overall excellent rating for this program lay, quite differently, in the uneven quality of the sound. Every voice seemed to project at a unique level, so that words were occasionally incomprehensible. For a form that depends on plot, this was a big handicap.