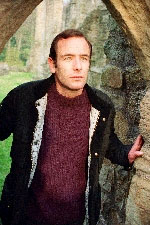 The BBC has apparently expected to ride on the reputation of the series’ leading actors, instead of contributing toward its long-standing reputation for quality programming here.

Let’s take the bad news first. In the past couple of years, BBC programming has raced, not walked, to keep pace with the plummeting standards of American television programming. Indeed, BBC America has been an active and eager contributor to the process, replacing dramatic series with home-improvement, house-and-garden, and other reality-TV type shows. Quality British comedy has all but vanished from BBC America, and the viewer is forced, more than ever, to turn to PBS for quality programming-whether it originates from Britain or the U.S.

Nor does Wire in the Blood keep pace with the standard set by the BBC for earlier Robson Green work, notably in Touching Evil or Reckless. Indeed, BBC America seems to have given up trying to swim with HBO, Bravo, or PBS.

Now for the good news. Compared with the rest of BBC America’s current programming, or indeed, the overall output disgorged into America’s cables, Wire in the Blood emerges as comparatively intelligent, cinemagraphically sophisticated, and satisfying, if not nourishing, brain candy for the detective-drama junky.

In episode one, "Still She Cries," psychologist Hill attempts to create the profile of what seems to be a serial murderer, a masterfully manipulative individual. A highlight of episode one lies in the writing, reminiscent of pre-World War II-era fiction which pondered emergent fascist mind-control in the 1920s and 1930s. The purported murderer manages to draw the women in Hill’s professional life, under his, the murderer’s, control, and by tugging on psychological invisible strings, unleash at least one of the women on Hill. The hapless psychologist finds himself in jail on grounds of rape, his female accuser having been psychologically "set up" by an unsuccessful rape attempt made on her.

Meanwhile, Hill is helping a multiple-personality convicted child-murderer locate the burial site of those children. Helping the police recover the bodies is a symbolic effort for the murderess to find herself. Meanwhile, she cannot live without Hill being instantly available at the other end of a cell phone. Alas, the degree to which every female character throws herself at Green’s character, as well as the heroic degree of empathy the character has for victims and murderers alike, stretches the willingness to suspend disbelief beyond the breaking point.

While the first episode makes visual references to the camerawork of Traffik and the like, the second episode, "The Darkness of Light," leans more toward The Sixth Sense and current computer-assisted gothic fantasy. The viewer who does not have four hours to settle in with Gormenghast may wish to sample it here. The plot pivots around mysterious, ritual burials in a 500-year-old natural chapel by a wood. Why are the bodies all buried facing north? And why have 500-year-old corpses been dug up, fresh bodies buried in their place, and the original corpses reburied at the top of the pile? The real question here is, who cares?

The real disappointment in Wire in the Blood is that Robson Green’s acting has been reduced to cliches: Dr. Tony Hill is a brilliant but quirky scholar of criminal psychopathology. He is inept in the relationship department, even though no halfway attractive female can help but throw herself at him. His professional relationship with Hermione Norris’ Carol Jordan character serves as the almost-romantic interest. The primary question in season two seemed to be, Will Tony bed Carol this week or not?

The series showed a great deal of promise, by foregrounding powerfully insightful and unusually empathic examinations of criminal and victim psychology-and the show does seem to plead for society to show more compassion and less blaming of victims-turned-victimizers. Sadly, that commitment has been watered down by an obvious pandering to formula to boost viewer ratings. Wire in the Blood is recommended for only the most hardened fan.