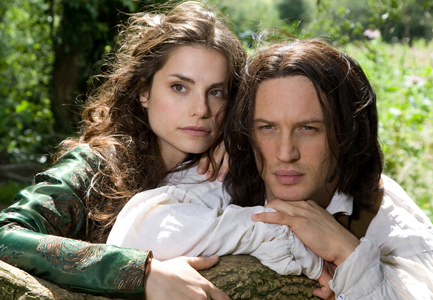 Set in the rugged moors of Yorkshire during the late eighteenth century, Wuthering Heights is the fiery tale of the passionate love between Heathcliff (Tom Hardy, Oliver Twist) and Cathy Earnshsaw (newcomer Charlotte Riley), the obstructions to their unity, and the destructive effects of their obsession on the next generation.

Mr. Earnshaw adopts Heathcliff, a mysterious young gypsy orphan, and brings him to live at Wuthering Heights with his children, Cathy and Hindley (Burn Gorman, Bleak House). Cathy, wild and willful, finds a constant companion and soulmate in Heathcliff, while Hindley, spineless and sadistic, bullies and beats him.

Angry and bitter, Heathcliff disappears for three years. He returns on Cathy’s wedding day, having mysteriously become wealthy and articulate. His obsessional love for Cathy has now transmogrified into an obsessional need for revenge against Hindley and the Linton family. He focuses that revenge on Hindley’s son (Hareton), Cathy and Edgar Linton’s daughter (Catherine) and his own son with Isabella Linton (Linton).

Masterpiece Classic’s Wuthering Heights has all the makings of a first rate version of the novel…strong cast, fine direction by Coky Giedroyc, well-written adaptation by Peter Browker, outstanding production values, fine locations and costumes. Yet it does have some minor weaknesses.

This version of Wuthering Heights begins with a confusing flashback; both generations are introduced at once and without sufficient distinction among the characters. The flashback is soon replaced by the story’s chronological start and the tale becomes clearer.

Although the performances are convincing, moody scenes on the moors, foul weather and dark rooms often are used as substitutes for the actors’ portrayals of emotions.

Where was Heathcliff for three years and how did he amass his fortune? What changed him from a silent submissive boy to a confident and powerful man?

There are no characters with whom one identifies. Cathy is selfish, stubborn and spoiled; Heathcliff is fiendish and vengeful.

Nevertheless, this fine production captures the essence of the intense love between Cathy and Heathcliff. It will, deservedly so, be enjoyed by a wide audience.