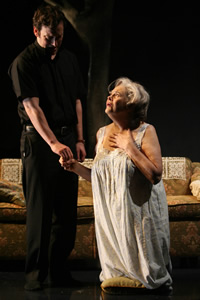 100 Saints You Should Know

100 Saints You Should Know, by Kate Fodor, is Playwrights Horizons’ first show of its bold 2007-2008 season, a year devoted solely to new works by emerging playwrights.  A powerfully simple play, 100 Saints follows a young priest, (Jeremy Shamos) who is questioning his faith, and a single mother (Janel Moloney) who seeks to return to hers.

Mr. Shamos is funny and tragic as Matthew, the conflicted man of the cloth.  His situation is less scandalous than the ones we see in the headlines today, but more sadly profound.   Religion, it seems, has made this priest a very lonely man.  God’s love not being enough, he craves the intimacy and touch that only another person can provide.  He yearns for flesh, not in a sexual way but for the sheer connection it would give him with a fellow human being.  Ms. Moloney’s dilemma is quite the opposite.  Theresa is young, attractive and has no lack of men in her bed.  But since her daughter, Abby, became a teenager, she’s begun to feel drawn to the church and to Father Matthew’s sermons.

Matthew escapes the parish and returns home to his mother Colleen, (played by the incomparable Lois Smith), who shrewdly guesses that all is not well with her son.  The heartbreaking scenes between Mr. Shamos and Ms. Smith are difficult to watch and hint at a complicated relationship that became fractured long ago when Matthew’s father died.   While Mr. Shamos seems to not be able to help wanting to push her buttons—and to perhaps let her know the real reason for his return, Colleen continually sends him to brink of despair by implying that she will refuse to accept him in anything but a priest’s collar.  Sadly, he wants something she is unable to give – an unconditional, physically affectionate love.  As Colleen, Smith is stubborn, determined and staunchly Old World.  And yet it is hard to not feel compassion for this lonely old Irish woman who has pinned all her hopes and dreams on her only son’s vocation.

Janel Moloney’s character, Theresa, has her own issues with her rebellious daughter, (a pitch-perfect Zoe Kazan) born to her at age 17 and fast approaching that age herself.  Lacking in parenting skills (she forgets her daughter’s lunch money and brings home unsuitable men,) she begins to attend Father Matthew’s sermons looking for guidance and redemption.  Their worlds collide one evening after Matthew has moved out of the rectory and after a horrific accident, the two come together to some solace in each other’s company.  Making an impressive NY stage debut, Ms. Moloney nicely underplays the part of the earthy single mom turned rectory maid.  She has a remarkable, almost angelic, openness about her that makes it easy to imagine her character getting swept away by the ideas in a sermon yet keeping both feet planted firmly on the ground.