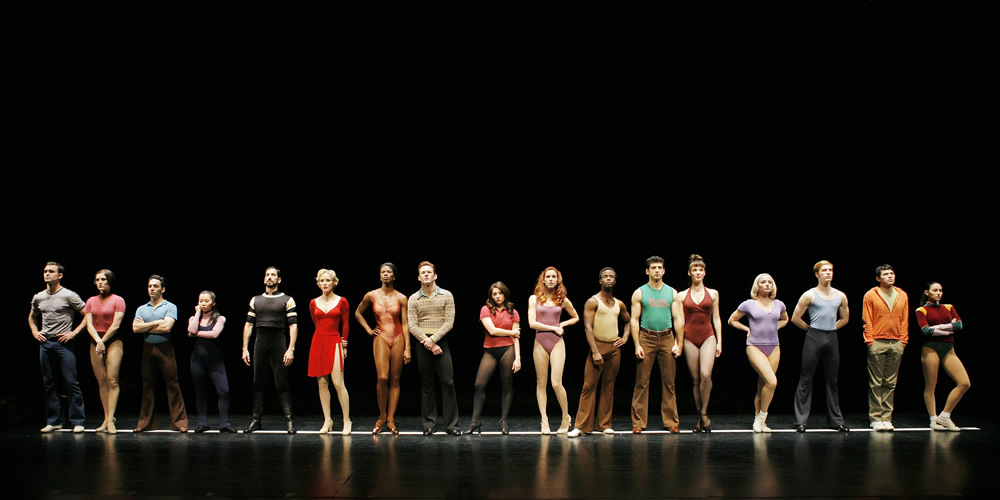 Broadway gypsies are back in the spotlight thanks to a crisp new revival of A Chorus Line, directed by Bob Avian, who co-choreographed the original production with Michael Bennett.   This terrific new production shows why Michael Bennett’s tribute to Broadway chorus dancers ran for 15 years.  Baayork Lee, the show’s first “Connie,” has made a career of helming Chorus Line productions all over the world and here, she lovingly recreates much of the original choreography.

Bennett created A Chorus Line  from a series of workshops he conducted with Broadway dancers about their lives, hopes and fears.  Much of the show is taken word for word from tapes he recorded at the workshops.  The show is set up as an audition from beginning to end, where the director/choreographer, Zach, puts a group of hopefuls through the wringer, physically and emotionally.  In addition to the dance routines, each is asked to respond to personal questions and reveal something intimate about themselves.  Sometimes he probes deeper and forces the dancers to confront painful truths they had long ago buried.  At times, Zach speaks to the group from an offstage microphone, further intimidating the group.  To add to the tension, Zach’s old lover, Cassie, is also auditioning.

The opening number showcases the late Mr. Bennett’s considerable talents as a choreographer and features the classic Broadway dancing of Mr. Bennett’s day.  The moves sizzle, the leaps are athletic and the whole sequence energizes the audience.  For anyone who has been conditioned to think “singers who move well” can dance, A Chorus Line will be a happy reminder of a time when triple threats were alive and well on Broadway.

The show, although slightly dated, holds up well.  Indeed, the 70’s are now far enough in our past for this to be considered a period piece.  And while the world and Broadway may have changed, many things are still the same for Mr. Bennett’s beloved gypsies – dancers still have to endure physical injuries, a very short career and a system where good looks are equally as important as talent.  Mr. Bennett had true respect for each dancer’s story and the heart of show lies in the sincerity and earnestness by which these stories are told.

Most of the ensemble is quite strong.  Standouts include Jason Tam as a vulnerable Paul and the charismatic James T. Lane as Richie.  Michael Paternostro steals the show as the flamboyant Greg and Natalie Cortez demonstrates a sweet genuineness as Diana.  Michael Beresse’s Zach is quite strong when he is onstage interacting with the dancers, but when he is on the “God” mic, his voice takes on an artifice that makes him a bit of a caricature.  To be fair to Mr. Beresse, his character is already an archetype of the egotistical, arrogant director and he does a nice job of balancing Zach’s hauteur with the empathy he feels for the dancers.  His scenes with Cassie are poignant and the chemistry between the two gives you a nice sense of the history between them.

Charlotte D’Amboise as Cassie is the hook that anchors the show.  Costumed in the now iconic red dress of the character, Ms. D’Amboise is sexy and sensational in the role made famous by Donna McKechnie.  She brings an authenticity to the part that some of the other performers lack and her dancing in Cassie’s signature number “The Music and the Mirror” is just plain sublime.  There is also something almost too perfect about the casting of Ms. D’Amboise, who is more known as a high-profile replacement than a star in her own right.  As Cassie, she shines and proves that she is indeed a leading lady and she alone is reason to see the show.  Happily, the rest of the line does justice to Mr. Bennett’s masterpiece.  A Chorus Line  will leave you exhilarated and moved to tears.