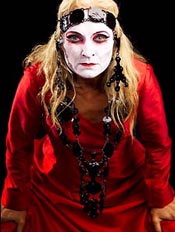 The story of Deirdre of the Sorrows is one of the best known in all of Irish mythology. Deirdre is a beautiful girl, locked away in a tower from birth, who is to be married to Conor, King of Ulster. As she grows up, she dreams of a white skinned, red lipped, raven haired young man. He is Naoise, the popular nephew of the King, and, when they finally meet, they instantly fall in love and go on the run, accompanied by Naoise&#146;s brothers. Conor is furious, but offers pardon. The party returns, but are betrayed. Deirdre is captured and the brothers are slain. Deirdre later commits suicide, having spent her remaining life in mourning.

Vincent Woods&#146; epic, poetic retelling of the story of Deirdre and the Sons of Usna is far from the first.Yeats andSynge tackled it for starters; it is standard in numerous books of Irish mythology and taught in classrooms in various iterations. As such many of the points of interest in this production are to do with the choices made by Woods and director Olivier Py.

On paper, Woods&#146; script reads like poetry. It is written in blank verse form and built around consistent symbols, metaphors and vocal cadences. The story is told here as classical drama, a tale of the tragic folly of humans who oppose the fates. It is an appropriate form and Woods’ choice of vocabulary makes the dialogue accessible without losing the Shakespearean feel. It is also solid storytelling, with well-realized characters drawn from familiar archetypes. Nonetheless it would be difficult to see how this could be staged without reducing the audience to peals of inappropriate laughter at the old-fashioned classicism of it were it not that he developed this script with Py in mind. Py is a playwright and performer in his own right, best known for his work in France, including a cycle of five plays running over twenty-four hours, La Servante.

What Py delivers is an assault on the senses. From the almost constantly rain-drenched stage (upon which actors frequently slip) to the ghost-white make-up smeared by physical contact, this production has a visceral, tactile quality akin to productions by Calixto Bieito (Hamlet, Barbaric Comedies), if not quite so confrontational. Py makes full use of the Abbey stage to introduce massive, black-painted, movable settings upon which his actors climb, crawl, leap, sit and stand as appropriate. Blood-smeared props are picked up from the ground, used and dropped by one character, then picked up again later by another to be used again and again dropped with an audible clatter. Huge tubular bells are suspended at the rear of the stage and are beaten by the company in time with the sonorous, oppressive score which pummels the ears from beginning to end: in short, it is a total sensory experience.

Arguably, the staging threatens to overwhelm the material, which is not quite as radical or as emotionally involving as the strident approach would suggest, but if you go with it, then the production works. There is plenty to enjoy here, not least of all the full-bore performances from a universally strong cast. Kelly Campbell makes a strong, lusty Deirdre and Alan Turkington conveys quiet strength as Naoise. Ciar�n Taylor does a comic turn as the churlish, foolish Conor caught between the polar forces of his wild, ambitious mother Ness (Olwen Fouere in a scary performance) and the reasonable, diplomatic Fergus (Denis Conway). Occasional lines of dialogue fall flat and draw giggles, but on the whole the committedness of the company carries the aesthetic all the way through. If you expecting some twee light Celtic entertainment though, then this is definitely not one for you. Summer visitors don&#146;t usually expect this kind of way-out staging outside of the theatre festival and it must be said that there seemed to be some bafflement among sections of the audience at the performance attended by this reviewer.