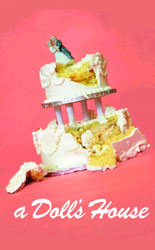 A century and a quarter have passed since Henrik Ibsen&#146;s A Doll&#146;s House scandalized respectable audiences and delighted independent thinkers. A lot of progress has been made since then, especially in the area of women&#146;s rights. But, as the old saying goes: &#147;The more things change…&#148; It&#146;s not all that different nowadays after all, as any female who has hit her head on the glass ceiling might tell you. All of which makes Ibsen&#146;s drama &#150; one of the great classics of the stage at any time &#150; incredibly relevant.

American Conservatory Theater’s new production does the Norwegian master proud with an up-to-date translation by Paul Walsh and a leading lady, Rene Augesen, who rivals some of the great actresses who have put on Nora&#146;s coat and slammed that famous door in the past. Augeson is not only beautiful to behold, but she manages the transition from her husband&#146;s pampered &#147;little bird&#148; to a fully human being with believable ease. It is a lovely performance.

A secret lies at the heart of the Helmer&#146;s eight-year-old marriage, the kind of secret that is buried deep until it works its way to the surface and destroys everything in its path. This is neatly paralleled by the inherited venereal disease that is gnawing away at the spine of the kindly physician (James Carpenter) who is the family&#146;s closest friend. Both spring from love: in the case of Dr. Rank, the love of his father for ladies of the night. For Nora it is her youthful love for her husband that moved her to forge a signature on a piece of paper that will come back to haunt her, a love that is betrayed by the upright, uptight Torvald Helmer (Stephen Caffrey) when he discovers what she has done.

Director Carey Perloff has done a masterful job of modulating her actors&#146; performances. Augesen, especially, goes from a playful wheedling &#147;little woman,&#148; her husband&#146;s pet, to a distraught, near-suicidal wreck in the space of a scene change. Caffrey is condescending one moment, amorous the next and then cold as ice. Joan Harris Gelb stands out in the supporting cast as Kristine, a poverty-stricken widow who comes to her old friend Nora for help and ends up giving more than she receives. The Helmer children, played by Austin Greene and Tobi Jane Moore, are adorable. Gregory Wallace as Krogstad, the villain, strikes the only false note. As written, Krogstad is a sympathetic character of sorts. He&#146;s had a hard life, lives on the fringes of a society he longs to join and does what he must to survive. But all Wallace lacks in his smarmy portrayal is a long cloak and a mustache to twirl. He generates so little sympathy for the character that it is hard to swallow his sudden transformation at the end.

And Joy Carlin, competent, as always, in the small role of the nanny, is illustrative of some of the ideas about women treated in the play. Once a leading lady at ACT in her own right, the respected Bay Area actress has about ten lines here. As far as society has come since Ibsen&#146;s day, it may still be true that, once our songbirds&#146; plumage begins to fade, there seems to be no alternative but to clip their wings.