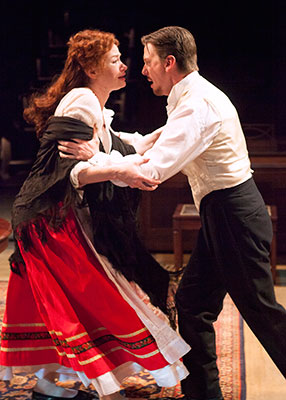 At the heart of The Old Globe’s new adaptation is an eloquent reminder of why this century-old classic endures.

It’s Christmas. Nora Helmer (Gretchen Hall) enters her seemingly safe and secure home and scatters inconsequential gifts for the family on a table. She is equally adept at scattering lies of varying consequence while conversing with husband Torvald (Fred Arsenault).

The most egregious of those lies took root eight years ago when Nora, in financial desperation, forged her dying father’s signature to secure a loan that enabled her to save her ill husband’s life. That secret has compounded over the years like the interest owed on the exorbitant sum that Nora fitfully chips away at by diverting funds from her household allowance and by secretly doing odd jobs such as copying letters late into the night.

She confides all this and more to the Kristine Linde (Nisi Sturgis), a widowed friend seeking seeking Nora’s help in gaining employment. Torvald has just received a lucrative promotion at a bank, and Nora, wielding imagined power, assures Mrs. Linde that she can convince her husband to hire her. Nora succeeds but it’s a hollow triumph when she learns that Nils Krogstad (Richard Baird), the man who holds the note to Nora’s toxic loan, was fired by Torvald to free up desk space for Mrs. Linde. Krogstad now ups the stakes by threatening to reveal all unless Nora intercedes on his behalf.

While the bullying Krogstad is initially off putting, Baird’s finely nuanced performance eventually brings us around to sympathy as a complex character is revealed; one shaped less by malevolence than by the social strictures of Victorian times.

A panicked Nora pleads to Torvald to rehire Krogstad are to no avail. Nora considers turning to well-heeled and devoted family friend Dr. Rank (Jack Koenig) for financial help. But before she can make the request, the wind is knocked out of her sails when Dr. Rank reveals he’ll soon be dead of an incurable illness he’s kept hidden and, by the way, he has secretly been in love with Nora for some time. Koenig’s portrayal is another more-than-meets-the-eye performance, as Dr. Rank faces with moving dignity the cruel hand life has dealt him.

Eventually, of course, Torvald does learn of Nora’s misdeed and things unravel badly. Rather than coming together as a married couple should in a crisis, Torvald’s reaction is vicious and self-serving. Rather than making her contrite, Nora exhibits newfound resolve that leads to (at the time) a shocking ending.

“A Doll’s House”is part of the Globe’s Classics Up Close series, which presents great dramas in fresh and often unexpected ways. In this case, director Kirsten Brandt and translator Anne-Charlotte Hanes Harvey teamed up to create a new adaptation that successfully uses contemporary language and American vernacular to pull in an audience. Staged in the Globe’s Sheryl and Harvey White Theatre, the intimate space has theatergoers as close to the actors as an eavesdropping servant in the household. Scenic designer Sean Fanning has styled a living room of rich woods tones and furnishing that convey status (piano, tables with graceful legs, intricate carpet). Actors enter and exit on wooden walkways, reminiscent of a ship’s plank. Suspended overhead is driftwood lumber. This, plus Paul Peterson’s sound design of the Norwegian winter sea, adds to a sense of characters cast hopelessly adrift. Costumes, designed by Alina Bokovikova, displaying exacting and painstaking detail in the pleats, buttons, tucks, and trims true to the period. Nora, in particular, is a doll just removed from a store box: elegantly wrapped and trapped by her wardrobe.

At the time of its 1879 debut, the ending of “A Doll’s House” aroused considerable controversy. The idea that Nora would leave her husband and children because she wants to discover herself was unthinkable. Public howls of protest were heard. Fast forward to today, when there are few if any barriers to a woman discovering herself. Yet, modern society often succumbs to an outdated view of what it means to be a good wife. For example, this production opened the week that an accomplished woman named Yvonne Brill died. A brilliant rocket scientist, Dr. Brill had received the National Medal of Technology and Innovation for groundbreaking work. Yet, her New York Times obituary began: “She made a mean beef stroganoff, followed her husband from job to job, and took eight years off from work to raise three children.”

This time, different howls of protest were heard. “A Doll’s House” continues to make sense of it all.