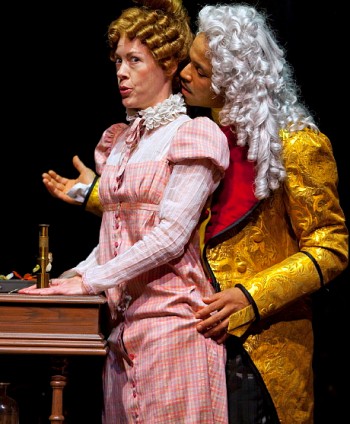 Veanne Cox and Jeffrey Wright in “A Free Man of Color” at Lincoln Center
Photo by T. Charles Erickson

A Free Man of Color

John Guare’s “A Free Man of Color” is an epic tragicomedy every bit as ambitious, thoughtful, and panoramic as Tom Stoppard’s three-part “The Coast of Utopia” (which had its New York debut at the same theater, Lincoln Center’s Vivian Beaumont) and Tony Kushner’s “Angels in America” (whose Broadway debut had the same director, George C. Wolfe). Although renowned for domestic comedies such as “The House of Blue Leaves” and “Six Degrees of Separation”—both of them contemporary classics—Guare has scratched the epic itch before with a trio of related plays set in the period during and after the Civil War, collectively known as “Lydie Breeze.” Indeed, few of his works have ever shied away from wildly imagined multiple narratives sprawling in time, space, and dimension.

Still, Guare has outdone himself with “A Free Man of Color.” Here he plays theater nerd as hip-hop DJ, mashing up big swatches of classic dramas (William Wycherley’s “The Country Wife” and Ben Jonson’s “Volpone,” “The Merchant of Venice” and “Don Giovanni,” to name only the most obvious), in order to tell the story of New Orleans circa 1801 as a unique crossroads of freedom and slavery, geography and imagination, race and racism, American history and American dreams, Europe and Africa, perched halfway between the Caribbean Islands and the Mississippi River.

In keeping with Guare’s far-reaching, virtuosically allusive narrative, Wolfe stages the play in a self-consciously stylized manner. The show begins on a stage bare but for a proscenium arch crowned with comedy and tragedy masks and equipped with a red velvet curtain, through which sweeps Jacques Cornet and his manservant Murmur (Jeffrey Wright and mos, the artist formerly known as Mos Def, who last appeared on Broadway together in Suzan-Lori Parks’s Pulitzer-winning play, “Topdog/Underdog,” directed by Wolfe). Born to a slave mother and rich white father, Cornet earned his freedom by creating the factory that produced the wrought iron that distinctively graces balconies all over New Orleans. The wealth he inherited from his father now subsidizes his many indulgences, including but not limited to fancy clothes, loose women, maps of the world, and playwriting. He’s dressed in a purple coat with gold lapels, red pantaloons with gold stockings, purple shoes with diamond buckles, and a powdered wig, and he speaks in rhymed couplets:

“The year is 1801. Alas. This is the last time men will dress like this.
All men equal? Clothes tell the ranks.
I have taste. For that I give my daily thanks.
If a book can’t be told by its cover, what good’s the book?
The world would be better if it followed my lead.
If I’m a book, I’m a damned good read.”

And we’re off. The first act spends most of its time establishing Cornet as a Don Juan of color, who works his way twice through the girls in Mme. Mandragola’s bordello, wields his lavishly praised magic wand with the wives of four business associates, and still has energy to pursue his resentful half-brother’s young bride, a country gal from Natchez. But amidst these frolickings Guare delivers strange little pockets of history told in cartoony sequences.

We learn about the slave rebellion on the wealthy Caribbean island Saint-Domingue led by Toussaint Louverture, which will lead to the creation of Haiti, and the havoc that wreaks on the imperial dreams of Napoleon, whom we witness conducting business affairs from his bathtub in Paris. We watch as ambassadors from Spain, France, and the United States weigh among themselves the advantages and disadvantages of controlling New Orleans and the vast, as-yet-unexplored “white space” in the middle of North America. Maps represent dreams of the future as virtual cosmologies, and riches depend on discovering the best trade routes and amassing cheap slave labor to produce the goods. Dr. Toubib, a medical doctor of African descent who alternates with Cornet and Murmur as narrator/MC of the play, exhorts us to see race as a celebration and introduces us to the complicated vocabulary of mixed-race identities. Yet Cornet lives haunted by the specter of “le Code Noir,” the royal edict issued by Louis XIV in 1685 that codified the treatment of black slaves as property rather than human beings and whose impact has theoretically been irreversibly transformed by the French and American revolutions. Or has it?

In the second act, history, reality, and the violent desires of wealthy businessmen intrude upon Cornet’s carefree skirt-chasing. He aspires to increase his status through political connections with the likes of Napoleon, Thomas Jefferson, and Spanish intendant Juan Ventura Morales. Yet moral dilemmas emerge. How can he witness suffering and do nothing? What is the value of his freedom if it depends on the enslavement of others? In a duel, he kills his half-brother and lights out for the territories like Huckleberry Finn mixed with Robinson Crusoe. Out there he runs into Meriwether Lewis on his map-making expedition and winds up having a conversation with Thomas Jefferson about the gaps between the Declaration of Independence, with its promise of “life, liberty, and the pursuit of happiness,” and the Constitution, which contains no legal objection to slavery.

In case you haven’t gotten the picture by now, “A Free Man of Color” is a rich, dense, brainy banquet. It’s not the kind of play that goes down easily like an episode of a TV series. In that way, it’s challenging and not to everybody’s taste. It’s stuffed full of ideas that take the shape of full-blown characters, passing jokes, haunting images, verbal references, and/or footnotes that manifest like tidbits on MTV pop-up videos. Thirty-three actors play more than fifty characters, many of whom we spy in short bursts so we have to pay attention to them or get lost quickly. Wolfe has loaded up the cast with excellent, well-trained comic actors and empowered them to hold their own. For the actors I imagine it’s both fun to hurtle through a show like this, playing several different elaborately costumed characters (backstage must be a riot), and a little bit thankless, because it’s not a play where we actually get to know and empathize with the people. That’s the liability of stylized theater and historical pageants—individual performances get sacrificed to the overall argument. And yet a handful of actors definitely stand out here.

Wright has to carry the play and never lets it down. He has the solidity and confidence to inhabit a character who is at once sensual, scheming, and mythological. Mos gives a much more subdued but beautifully detailed performance as Murmur that bravely takes on all the hero’s sidekick references Guare throws at him (from Sancho Panza to Moliere’s Sganarelle to Don Giovanni’s Leporello) without disappearing into Wright’s shadow. Veanne Cox becomes for this ensemble what Kathleen Chalfant was in the original production of “Angels in America”—dazzling in three very diverse roles. Peter Bartlett as the self-righteously racist Count Achille Creux made a strong impression on me, as did Justina Machado (as both French and Spanish “first ladies”), Joseph Marcell as the dignified Dr. Toubib, Nicole Beharie as Margery the country wife, and Reg Rogers as both Cornet’s half-brother Pincepousse and Napoleon’s foreign minister Talleyrand (who is described as “a silk stocking full of shit”). Several of the actors affect a kind of gravelly croak that unnecessarily distances them from their roles. I felt that most about John McMartin, a musical-theater veteran who blands out in the play’s very interesting and complicated rendition of Thomas Jefferson.

George C. Wolfe is at the peak of his powers not only in drawing carefully crafted performances from his actors but also in managing the incredible amount of machinery required to shift among so many scenes and locations while keeping the stage picture thoroughly alive. (You only have to look across town at Bartlett Sher’s production of “Women on the Verge of a Nervous Breakdown” to see another seasoned director do this kind of spectacle poorly.) It’s not easy at all, and yet Wolfe pulls it off without breaking a sweat. His work here matches what I’d previously considered his best work, the Tony Kushner-Jeanine Tesori musical “Caroline, or Change.”

When Wolfe was still artistic director of the Public Theater, he commissioned Guare to write a play about the Louisiana Purchase and its impact on American culture. Guare clearly stepped up to the challenge by devouring everything ever written on the subject, and he crammed as much of it into “A Free Man of Color” as the traffic would allow. I could follow most of it, but maybe 20 to 25 percent of the time it felt like Guare sort of left the audience behind to conduct a conversation with himself about the subject matter of the play. I don’t say that as a complaint, really. I enjoy sitting in on a conversation with someone really smart and witty, even if a certain amount of it goes over my head.

I was glad that I’d recently seen Alex Timbers’s historical-satirical “Bloody Bloody Andrew Jackson,” Lisa Kron’s highly political “In the Wake,” and Daniel Sullivan’s production of “The Merchant of Venice,” which collectively prepared me for both the subject matter and theatrical stylization of “A Free Man of Color.” There’s almost no point in going to see a theatrical epic like this (or “The Coast of Utopia” or “Angels in America”) without being willing to do some preparation beforehand and some digestion afterwards. Lincoln Center Theater publishes a special issue of its in-house journal for every major production, and its “Free Man of Color” edition is full of material that will greatly enhance your experience of the play, including an interview with Guare and Wolfe, D. Graham Burnett’s essay on cartography, and Ned Sublette’s extremely illuminating capsule history “When the Caribbean Came to New Orleans.”