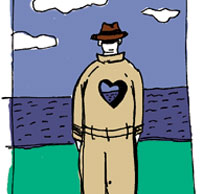 Hugh Leonard is a prolific writer with thirty-two stage plays to his credit.A Life was first produced by the Abbey Theatre in 1979 and has had successful runs in cities around the world. The Abbey Theater has revived it this summer in a delightful production that gives a new generation of theatre-goers the opportunity to savor its humor, wisdom, and humanity&#151;sharply and deeply felt.

A Life draws on autobiographical materials that Leonard tapped both in his memoir, Home Before Night, and in the later play,Da. It surely belongs to the great Irish tradition of storytelling and conveys a palpable sense of place in the glimpses of small town life, the mores of the times, as well as the day-to-day detail&#151;you can almost taste the stout the men drink in the second act. But Leonard’s canny observation carries A Life beyond regional interest; this is work of universal insight into human weaknesses and strengths, and the knotty crisscrosses of personality and relationships.

The central character, Desmond Drumm, a civil servant nearing retirement in 1977, thinks back to a time forty years earlier, as he seeks to mend some frazzled relationships and sort out his past. There is a cast of eight playing four characters, four in their youth, four now at maturity. The action shifts smoothly back and forth between the periods, allowing memory and reality to cross-check, allowing the past and the present to illuminate each other.

Drumm is an intelligent and scathingly witty man, whose sees his unedited comments about others as honesty and truth, while failing to see the truth of the pain he thus insensitively inflicts. Tirades of condescension flow from him like venom. He calls Lar, a friend through all those years, "a man of no malice and less merit." In their youth, they both wooed Mary; Lar won her hand. In one of the particularly fine speeches of the play, the young Mary, played here with both passion and humor by Fiona Glascott, explains to Desmond why she chose Lar over him. Her insight is so clear that even Desmond must accept the reason of her choice through his hurt.

Drumm marries Dorothy, a more accommodating type, who is able to see through Desmond’s thorny exterior and admires and loves him for the virtues that shine behind his coruscating words. Let a sentimental or cliched question be asked ("Where has the time gone?") and Drumm is ready with the sardonic response ("Most of it has gone to listening to banalities…"). Even his wife’s infinite patience is attacked: "Her tenderness will soak into me like damp rot."

But Drumm has discovered (as he cites G.K. Chesterton), "’The decent inn of death’ isn’t decent when you see it up close. It’s a kip!" as he painfully begins to understand the consequences of his past behavior on those for whom he cares and who care for him.

Leonard’s superb ear for dialogue is well-served by the ensemble cast, and director Ben Barnes expertly brings out the dawning realizations, the interplay of characters, the humor, the sadness, and the multiplicity of ironies. A Life may be an old-fashioned play, but it should never go out of style.