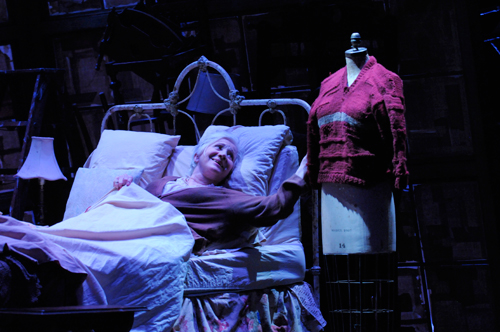 Silence is golden but on the stage it can be pretty tricky. Unless you are Harold Pinter or an actor in a British pantomime. Canadian triple threat playwright/director/actor Morris Panych uses it as a tool in his comedy “Vigil” and, as wielded by veteran actress Olympia Dukakis, it is a mighty weapon, although perhaps not requiring a performer of her stature.

“Vigil” is a very funny play about a very serious subject – death. A man (Marco Barricelli in a welcome return to American Conservatory Theater) rings the doorbell of a ramshackle apartment (wonderfully cluttered by set designer Ken MacDonald) to find a somewhat hostile, definitely confused old lady (Dukakis) glaring at him. She is the aunt he hasn’t seen in 30 years and he has left his job and packed a suitcase in order to rush to her deathbed. He needn’t have been in such a hurry. More than a year passes, in a fast series of short scenes, most of them ending on a one-liner, and Kemp, the man, is still hanging around, bringing his aunt Grace butterscotch pudding and planning her funeral.

He rehearses the eulogy, choreographs the cremation and gives away her clothes (those that he doesn’t casually dress up in) while she sits silent on the bed, sometimes astonished, sometimes amused. Dukakis’ face speaks volumes, although she utters only a few lines, the first as the Act One curtain falls. The man, on the other hand, never stops talking – going over his miserable childhood, unloved, unnoticed, his father manic-depressive and suicidal, his mother a lush. He blames his idealized, once-glamorous aunt for never coming to rescue him. He has grown up to be an isolated, friendless, somewhat asexual cipher in a dead-ended bank job. He blames her for that, too.

This is not the handsome, suave Barricelli who graced the ACT stage for years as a member of the core acting ensemble before leaving to head up Shakespeare Santa Cruz. Disheveled and defeated, his shoulders slumping and his head hanging, the actor fully inhabits the character of the lonely Kemp. Sometimes it seems as though he is the one who is dying, especially over time as he deteriorates and the old woman seems to perk up, putting on lipstick and sneaking out of bed when his back is turned. In spite of the gravity of the subject, however, the laughs keep coming, never more than when, in desperation, Kemp devises a number of intricate plans to hasten his aunt’s demise.

A stunning revelation in Act Two turns the play around and, at the end; the friendship that has grown between the two shut-ins is apparent, and moving. The conclusion is poignant. “Vigil” is not a great play but it is a highly entertaining two hours in the theater. And the acting, whether it is Barricelli running on and on or Dukakis in her reactive silence, is worth the ticket price.