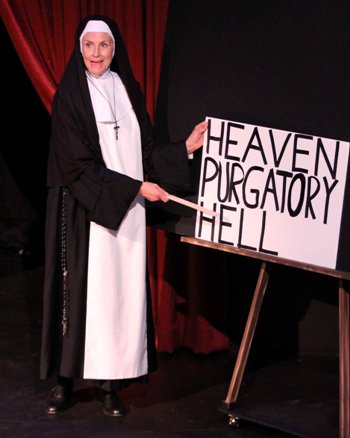 Bernadette Burkett in the title role from “Sister Mary Ignatius Explains It All for You”
Photo courtesy of Doma Theatre Co.

These two one-act plays have been rattling around theaters large and small for some time now—“Sister Mary Ignatius” since 1979, “Actor’s Nightmare” since 1981—and are often paired as a comedy double feature.

Both have their moments. A man sitting behind me brayed like a goosed donkey throughout, whereas I chuckled heartily at first, but then less and less as the evening wore on and Christopher Durang’s comedic premises wore thin. He is celebrated for his bitter, black humor and if that’s your taste, you will not be disappointed.

“Nightmare” imagines an actor’s horrible dream of suddenly finding him/herself on stage before an audience, with no awareness of what the play is, who his/her character is or what his/her lines are. Timothy Miller admirably captures the confusion and panic of George Spelvin, possibly an accountant, who stumbles onto the stage with no understanding of why or how he got there—and what he’s supposed to do now that he is there.

The stage manager tells George he’ll be going on tonight for Eddie (Edwin Booth; Durang tosses out famous theatrical names and show titles like so much Mardi Gras lagniappe) with just 30 minutes to go before the curtain. Ellen Terry (Schoen Smith) and Henry Irving (Ricky Webster), two dominant figures of the English stage in the late 19th Century, rush by George en route to their dressing rooms and address him familiarly—although she calls him “Stanley.” George—or Stanley—has no idea who he is, let alone anyone else bustling around him.

As the play-within-a-play begins, George finds himself costumed as Hamlet but engaged in a brittle, Noel Coward-ly conversation with a beautiful, martini-sipping Sarah (Keri Blunt) in a 1930s time frame. As the other players join in, the plot becomes more scattered, more inane and, yes, funnier. Miller deftly, credibly, glides through his character’s phases of bewilderment, accommodation and, finally, determination to make the best of a bizarre situation as Durang zigs and zags through “Waiting For Godot,” “Hamlet” and “A Man For All Seasons.”

In the companion play, Bernadette Birkett so convincingly evokes the smug, authoritarian Sister Mary Ignatius that I, a long-lapsed Catholic, squirmed in my seat. This nun knows everything about everything: the on/off ramps to heaven, hell and purgatory; a who-is-going-where list of contemporary celebrities (a carpool with Tennessee Williams, Brooke Shields, David Bowie and Mick Jagger is in the fast lane to hell); a lawyerly parsing of mortal and venial sins and, especially, reassurance that God really does love us even as He piles one misery atop another upon us during our short span of years.

Suddenly, four of Sister Mary Ignatius’s former students—Gary (Miller), Diane (Smith), Philomena (Angela Todaro) and Aloysius (M.A. Gomez), now all 30-somethings—show up to perform a Nativity pageant for her just as they did in her grammar school class years earlier. She is delighted—until she learns they have returned not out of affection for her, but rather to confront her with the painful, unrealistic strictures of Catholic dogma.

When she learns that Gary is gay, Philomena is an unwed mother, Diane has had two abortions and Aloysius is still an observant Catholic, albeit an alcoholic, spouse-abusing observant Catholic, Sister Mary Ignatius loses it. She excoriates the four young adults; they tell her to go to hell and take her mean-spirited, constrictive Catholicism with her.

Both plays, near the end, take jarringly sharp turns from farce to Grand Guignol horror.

In “Nightmare,” Spelvin finds himself playing St. Thomas More, the 16th-century Catholic statesman who defied King Henry VIII’s demand to countenance his divorces of Catherine of Aragon and the Papacy – or die. More chose death.

The befuddled accountant suddenly discovers he’s playing More. He’s bound hand and foot, with his head on the executioner’s block. But wait a moment – he’s on a stage, right? In a play, right? Isn’t that an audience out there? This has got to be another nightmare. But what if this is some sort of time-warped, Twilight Zone reality? The executioner (Ricky Webster) triggers the guillotine, the stage goes black—and when the lights come up, George Spelvin is not taking bows with the other players. Instead, the executioner lifts high a gunny sack with a bulky object inside. There were gasps, not guffaws.

There’s a similar jolting conclusion to “Sister Mary Ignatius,” when Diane—she of the two abortions, both brought about by rapes—enraged by the nun’s denunciations, whips out a small revolver and trains it on her tormentor. Turns out, however, that Sister Mary is also a member of the NRA; she whips out her own pistol and plugs Diane. For good measure, she shoots Gary also.

It’s not murder, she reassures the audience, for she is simply doing God’s work in ridding the world of sin and sinners—but if they had repented even a split-second before dying, they might at least gain access to purgatory. Again, gasps instead of guffaws.

The players, aside from the estimable Birkett, doubled in the two plays and were quite good. Director Hallie Baran would do well, however, to urge several of them to project more; their lines need to reach the back of even a 99-seat house, not just another actor standing a few feet away.