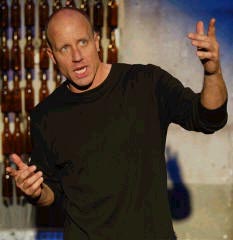 "Energy without grace," is how actor/comic Mark Lundholm describes his years as a speed, cocaine, and alcohol abuser and criminal, but Addicted, an auto-biographical, one-man show, manages to bestow the stage with both energy and grace in spades. In this ultimate 12-Step confessional, the fact that Lundholm, who wrote and performed the piece, started out as a homeless drug addict and ended-up a stand-up comic and motivational speaker doesn&#146;t hurt. A tightly scripted, well-directed one-act, Addicted takes the recovery program&#146;s standard feature, the public telling of the addict&#146;s own story, to the level of art.

Lundholm, much more than a comic, takes advantage of his hyperactive nature (he calls himself "Ritalin boy") to keep the story moving, literally. His extra bittersweet tale, which begins with the recollection of holding a gun to a woman&#146;s head, includes a botched suicide attempt and the abandonment of a wife and infant daughter. It ends with the admission that the subject matter the audience has just been subjected to "really isn&#146;t funny"&#151;needs all the levity it can get, but Lundholm is able to produce it. Darkness with humor creates a kind of release for both performer and audience, just as the starving soul at the heart of the piece calls out for empathy without saying a word.

Directed by veteran actor/director/producer Bob Balaban, the piece uses sound, lighting and blocking to effectively break-up the relentless nature of Lundholm&#146;s "bad is better" life-saga. And the script, honed after being presented in seven cities before San Francisco, including a long-run off-Broadway, is full of self-deprecating one-liners that keep the laughs coming throughout the 90-minute show.

"Life is like panhandling, it&#146;s all about change," he says. Lundholm&#146;s raucous rite of passage contains all the elements to create an effective one-man show, but the piece ultimately works because, at its core, it is everyone&#146;s story, about being faulty and trying to make sense of life. Lundholm&#146;s version is just better, because it&#146;s "badder."