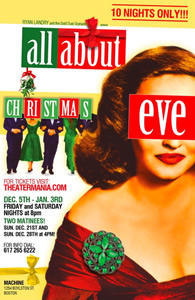 Fasten Your Seat Belts, It’s Going To Be A Bumpy Sleigh ride

Ryan Landry reinvents All About Eve in Boston

All About Christmas Eve

The Ramrod Center for the Performing Arts at Machine

In the early 1990s, when I first saw playwright and actor Ryan Landry’s ensemble The Gold Dust Orphans, the company performed in a tiny basement theater on the ragged fringes of a swanky zip code: Boston’s South End. This was, and remains, the heart of the prospering gay community here in Beantown. In those days Landry’s “theater” was a dormant space apparently long-neglected by nearby Boston City Hospital, but it had plenty of character. Patrons didn’t complain about the crowded foyer and toilets, the folding chairs furnished with hand-made cushions, or even a parade of flaming votive candles along the sidewalk-level windowsills. “Please don’t tell anyone at the fire department, or we’ll get closed down,” Landry once begged his audience during a curtain call speech.

The stage was barely the size of my present walk-in kitchen in Cambridge, though it was lovingly decorated with puppets, odd taxidermy, and hand-made sets that recalled Queen Carlotta’s dubious castle in John Waters’ Desperate Living. The spectacles were often parodies of classic dramas or Hollywood films: Medea, Rosemary’s Baby (The Musical), How Mrs. Grinchley Stole Christmas, et al. The mainstay of the company was the area’s more outrageous drag queens; local celebrities with stage names such as Afrodite, Penny Champayne, Olive Another, and many talented others. Landry rounded-out the ensemble with cute boys from area retail stores, college theater departments, or South End cafés. Bodacious beefcake from the local gyms (prized for their amateur acting) augmented the quirky style. It was all hilarious and shocking, but the small but devoted audience recognized also that something extraordinary was unfolding in that basement, and it knew that Landry’s brand of satire and camp was without doubt singular. Nearly twenty years later, The Gold Dust Orphans may be the only true practitioners of clever camp in Boston. Their plays and musicals are not, however, delivered without a certain dose of contempt, which makes it serious food for thought. Landry has always aimed at the pretentiousness of the bourgeois and the elite, especially where and how it happens within the gay community.

The Orphans still perform in a basement, but a much larger one: Machine, a dance club, situated under the notorious Ramrod, a leather bar on Boylston Street. Straight white liberals, as bored with the local theater scene as their gay counterparts, flock now to Landry’s productions. The Orphans are reviewed by all the big newspapers, even the Boston Globe. Recently Landry’s extensive oeuvre was theorized over many pages by scholar Karen Krahulik in GLQ: A Journal of Lesbian and Gay Studies ((Vol. 15, No. 1, published by Duke University), where it was intriguingly codified as “booger drag.” In other words, theater that renounces the questionable and “old school” desperation of female impersonation (epitomized by impeccable nail sculpture) for a more guerilla approach to gender. This is no surprise; I have always found Landry’s theater to be rich, unexplored territory for cultural critics. His greater theme has always been the indictment of the upper classes, and now those upper class fans love coming to Machine to see their habits and values so brilliantly mimicked. It reminds me of something Jean Genet once said about the wealthy: “they’re happiest if you steal something from them.” The Gold Dust Orphans used to be the gay community’s best-kept secret. Now they are also the white suburban liberals’ favorite guilty pleasure.

Which brings us to All About Christmas Eve, Landry’s latest take on the profitable holiday show. Never content to rest on his laurels, Landry is known to write a new play each Christmas season, and it’s always a big sellout. Past productions have included Who’s Afraid of the Virgin Mary? (a stark parody of Albee’s classic, featuring Mary and Joseph in the Burton/Taylor roles, Jesus as their “hysterical pregnancy,” along with a young and impressionable Mr. and Mrs. Claus, all of it played out with cocktails in a manger) and Christmas on the Pole (a re-invention of Mildred Pierce with Joan Crawford, and including an oppressed reindeer community at odds with the local alcoholic elves). Here Landry plays Margo Channing, Penny Champayne is the notorious Eve Harrington, dumpy in a oversized trench coat and a pair of purple Crocs, and Afrodite plays the ever-elegant Karen Roberts, Margo’s fair-weather friend (through a series of perplexing voiceovers it is revealed that Karen “hears voices”). Windsor Newton gives a stunningly tweaked-out interpretation of Miss Caswell, the bit-part played by Marilyn Monroe in the film, and Neil Graham is a devilish Addison DeWitt, the know-it-all critic who seems to be steering everybody where he wants them to end up.

Under the direction of James P. Byrne, All About Christmas Eve is much more than a satire of an overwrought film. Landry, in his usual fashion, mines these characters for archetype, and then adds dialogue and eccentricities to make these personae into something more complicated and manifold. Eve explains her daily suffering at a dead-end job and how the promise of an appearance by Channing was the only bright light in each gloomy day: “…when you’re a shampoo girl in a room full of drooling poodles! I went to see Margo Channing in Fruitcake.” When the two finally meet backstage, Margo is put off by Eve’s physical affection: “…there, there, let’s not get all Lezzy about it!”

The sets by Lady Tomb Raider and Windsor Newton are all black-and-gold, recalling a 1950s New York perfectly, and when the famed party scene goes over the top, the play becomes reflexive, with Margo replying to DeWitt, “…I had a little help from the original script.” There are numerous references to movies about stardom and individuality, from Female Trouble to Auntie Mame. And of course the local gay neighborhood takes a shot. As the party goes sour, a character suggests the action should move to a local club (Boston’s faded hangout, The Eagle), but Margo declines, saying, “I refuse to walk into a bar where even the flies are on antibiotics.”

Of course all of this leads up to the ill-fated performance where Eve must understudy for Margo, and the production in question is a musical titled No! No! Nativity!. Having seen so many of Landry’s productions over the years, I’ve learned to expect anything, and here he might have outdone himself. This “musical” is a five-minute dance montage of the entire life of Jesus Christ, from His conception to the visit of the Three Wise Men (one of them toting a Tickle-Me Elmo doll), to His crucifixion and ascension (the final pose shows Eve cradling Jesus as in Michelangelo’s Pietà), all of it set to the thrashing guitars of Edgar Winters Group’s 1973 hit Frankenstein. The scene is so visceral it is almost beyond critical inquiry. At the same time it sums up everything that Landry wishes to challenge in his unique theatricality. Fasten your seatbelts, indeed.

(15821)
$1.87 (as of January 24, 2021 - More infoProduct prices and availability are accurate as of the date/time indicated and are subject to change. Any price and availability information displayed on [relevant Amazon Site(s), as applicable] at the time of purchase will apply to the purchase of this product.)

(18187)
$2.85 (as of January 24, 2021 - More infoProduct prices and availability are accurate as of the date/time indicated and are subject to change. Any price and availability information displayed on [relevant Amazon Site(s), as applicable] at the time of purchase will apply to the purchase of this product.)

(232)
$7.49 (as of January 24, 2021 - More infoProduct prices and availability are accurate as of the date/time indicated and are subject to change. Any price and availability information displayed on [relevant Amazon Site(s), as applicable] at the time of purchase will apply to the purchase of this product.)
related posts