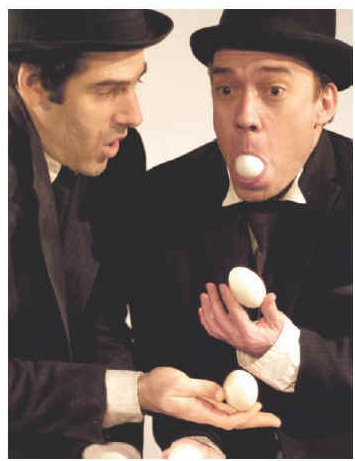 &#147;all wear bowlers&#148; is not a play, per se. It is both more and less. Definitely higher on sheer entertainment, silliness, and athleticism than the Center Theater Group&#146;s typical offering, it is lacking in story, significance or meaning. This is not an evening that will stick to the ribs. But it might linger in the mind like the wonderful gelato tasted years ago behind Santa Croce. A clue to &#147;bowlers&#148; classification is the current New York Drama Desk Award nomination for &#147;Unique Theatrical Experience.&#148;

Geoff Sobelle and Trey Lyford have created an ode to silent film. Though billed as a &#147;thoughtful message about identity in today&#146;s world,&#148;it is best seen as a montage of silent film impressions, magic tricks, and vaudeville. Action begins with a flickering film of the two actors, in bowlers and tramp attire, making their way down a dusty hillside projected onto a screen at the back of the stage. One pulls a map out of his rumpled clothes which has a wavy line with the legend &#147;you are here,&#148; i.e., nowhere. There are a few references to absurdist theater, and a small homage to Magritte &#150; yes an apple does appear under a bowler seemingly floating over a headless body &#150; yet &#147;bowlers&#148; is more absurd than about absurdity.

The magic, and perhaps the best part of the evening, is seeing the two characters on film and as they wander (or fall or fly) out of the frame, seamlessly emerging live onto the stage from the side of the screen as though they were wandering from the screen into the present.Their timing is flawless making the effect almost believable…unbelievably so. Dialogue is minimal. For some, perhaps, it would be best viewed as family entertainment that an adult can enjoy.Geoff Sobelle does a tour de force duet with a high ladder and Trey Lyford is completely convincing as a mannequin on Sobelle&#146;s lap.The pratfalls seem spontaneous and the audience involvement is minimal enough as to be inoffensive.

So what is there to tell?&#147;bowlers&#148; is two guys immersed in silliness, in love with clowns and silent film stars of the past, infused with athleticism and the art of the mime, mixed with a bit of magic and great timing.This is the genre of humor the French adore.For one who shares that passion, &#147;bowlers&#148; is a great show; for one who would find miming and meticulously choreographed chaos insufficient to sustain an evening &#147;bowlers&#148; could become a tedious ninety minute exercise.