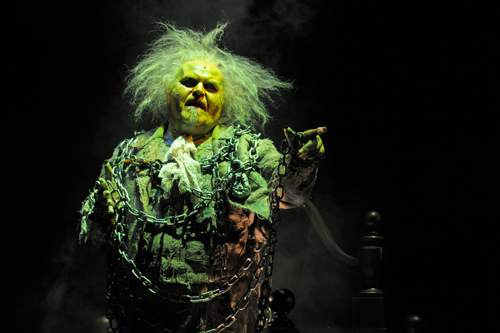 “God bless us, every one.” After “It is a far better thing I do …” there may not be a more famous line among all the thousands written by Charles Dickens. Little did the great 19th Century novelist imagine that it would be delivered by adorable little boys on stages all over America (and, for all I know, the world) with annual regularity.

This year’s edition at American Conservatory Theater in San Francisco is the best of times and the worst of times. A fast-moving, good looking production, it is helmed by the indispensable James Carpenter as the cantankerous old miser Ebenezer Scrooge. Carpenter is ably supported by some of the best Bay Area actors around – Sharon Lockwood comically doubling as Scrooge’s loopy landlady and jolly Mrs. Fezziwig, Jack Willis as the terrifying, chain-rattling ghost of Jacob Marley and Rene Augeson as sweet, lovely Mrs. Cratchit. (An ailing Gregory Wallace, another member of the A.C.T. core company, is cast as her husband Bob, Scrooge’s poor beleaguered clerk, and was replaced on opening night by capable understudy Kyle Schaefer). The imaginative storybook set by John Arnone and inventive lighting by Nancy Schertler contribute to the ghostly atmosphere of the tale and the final specter, The Ghost of Christmas Future, made all of veils skillfully manipulated by hidden onstage personnel is simply spectacular. Finally, it is short and sweet. And that’s the good news.

But A.C.T’s “Carol” is beginning to have more in common with that other holiday staple, “The Nutcracker,” than this particular critic is comfortable with. Dancing vegetables? A singing, swinging Spirit of Christmas Past? An oversized turkey that seems to be the equivalent of a pre-Victorian rubber chicken? A smattering of irrelevant songs (music by Karl Lundeberg) stop the action and threaten to turn the whole thing into a Broadway-type show (“Scrooge, the Musical?”) and only one, the final “Christmas is Here” is worth listening to.  All this tends to blur the outlines of what is essentially a morality tale, one of evil punished and good rewarded. Scrooge’s redemption – from a crusty, self-isolated skinflint to a human being — is at the heart of things and, with everything else that is going on, that heartbeat often is too faint to hear. Moreover, director Domenique Lozano has gone for the laughs whenever possible and even the excellent Mr. Carpenter mugs and exchanges quips with the spirits that haunt him. This is not a funny story folks.

That said, the proof of the Christmas pudding is in the eating and the kids in the audience, the girls in red velvet dresses and the little boys in what may be their first suits, gobbled it up with relish. This is the sound-bite generation, raised on Disney and television and a glitzed-up, tricked-out, humorous version of the classic ghost story not only is what they’re used to but what they expect. Who but an old curmudgeon – a veritable Scrooge – would deny them? It’s a safe bet that this “Christmas Carol” will be sung for many seasons to come, delighting young audiences and their parents too. And God bless them, every one!