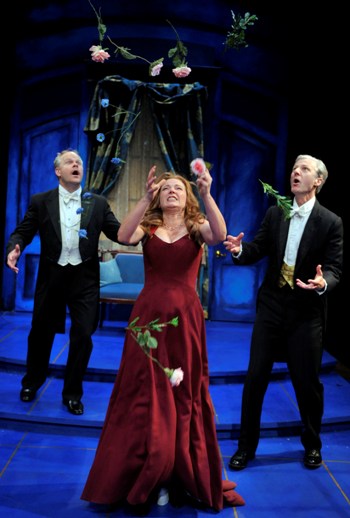 Arthur Schnitzler’s first play, “Anatol,” should sparkle like the glass of champagne the eponymous hero quaffs before dinner. The episodic tale of a fin de siècle playboy is meant to caress the palate as gently as the whipped cream on a Viennese pastry. But, in the Aurora Theatre’s new production (see video clip below), the champagne is kind of flat and the culinary comparison is closer to goulash mit dumplings than frothy schlag.

Not Schnitzler’s fault. The groundbreaking author (“La Ronde”) who shocked audiences and critics by bringing sex and all its attendant complications to the stage at the end of the 19th century has plenty to say about the hypocrisy of men and women in the throes of the tender passion and, in an excellent new translation by veteran Berkeley Schnitzler expert, Margret Schaefer, he says it smartly. The problem here is in the casting. Mike Ryan, who comes this way via Shakespeare Santa Cruz and San Jose Rep, among others, undoubtedly is a very good actor. He just isn’t Anatol. Earnest and sincere, he is the farthest thing from a smooth seducer you could imagine. He is the wrong physical type and less than young. Failing to evince the charm of the character, he makes the whole endeavor quite tedious.

A much better candidate would be Tim Kniffin, who plays Max, Anatol’s friend who casts a jaundiced eye on his buddy’s conquests and self-delusions. His leading man-good looks and smooth, cool delivery make up for the occasional swallowing of a line or two. With an urbane sophistication strangely lacking in Anatol, Max definitely lights up the stage in his scenes.

Delia MacDougall plays all the women— six of them — in Anatol’s life and has a wonderful time doing it. From a self-centered ballet dancer to a Russian circus performer, a high-society adulteress to a rather low lady of the demi-monde, she changes character and wigs with deft grace. Very funny in her more raucous incarnations, she is moving as Emilie, a gracious lady made to bear the unfair burden of her lover’s jealousy and again, as an elegant former lover who encounters Anatol on a wintry Christmas Eve (replete with snow).

A word here about John Iacovelli’s set design. Cleverly fashioned to represent Anatol’s rooms, a shop façade or the dining room at the Sacher with a swing of a wall and the lowering of a chandelier, it recreates an era, much as do Anna Oliver’s elegant costumes and the Strauss waltzes played in the the lobby before the show begins. “Anatol” is reasonably amusing and has much to recommend it. Just not the title character.