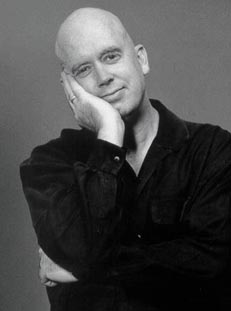 As ticketholders file into the theater, Rinde Eckert is seated at a piano on stage, facing away from the audience. Ethereal electronic music floats through the house. Multicolored light bulbs and many tape recorders are suspended from the ceiling on wires creating a forest of verticals on the stage. As the house fills, Eckert occasionally plays the piano, and looks through sheets of music, writing a note or two, but mostly what emanates from the stage is a growing feeling of intense disturbance, the large bulk of his bent-over figure somehow projecting an agitated unease. Once the lights go down, Eckert (as writer) wastes no time in stating the premise. Nathan is dying of an unnamed disease that is progressively eating away his memory; ultimately, he will forget to breathe and "will drown in his own ignorance." He is racing against his imminent death to complete an opera based on Moby Dick and has recorded a series of messages on the tape recorders to assist his failing memory. Nathan has conjured up a muse (Nora Cole), a figment of his imagination, who assists him, goads him, inspires him, and tries to help him hold the course (nautical metaphor intended) to finish his epic composition.

The only thing that is linear in Mr. Eckert’s utterly original musical drama is the inevitable process of dying. He alternates between Nathan’s here and now, his struggle to hold on to his failing mind and his driven creative mission to complete the opera, on the one hand, and descriptions of scenes and performances of arias and duets from the opera, on the other.

Eckert milks parallels between Moby Dick and Nathan’s journey: Captain Ahab’s crusade to become whole again in his pursuit of the great whale and Nathan’s drive to complete his art, to find a mote of immortality in the art that he would leave behind; as well, perhaps, to purge his anguished soul before he dies through the process of creation and expression of that art.

The music is a constant presence, an integral part of the effectiveness of this opera-like work. Whether a chase motif for Ahab with a driving, pulsing beat or an aria to "Call Me Ishmael, " that starts with sounds not unlike a Hebrew chant, the music is consistently intense, melodic, accessible. It would be wrong to say the music enhances – it is the very heart of the work. Nora Cole has a mezzo voice with a powerful edge that is never too sharp–when she sings "Come Sleep" it’s like a warm knife slicing butter. She is also a fine actress and provides the rational foil for Eckert’s more impressionistic, emotion-laden performance. Eckert’s voice is a wonder. Whether registering powerfully from center range or spinning out in falsetto tones it has a consistently intense, driving energy. Together with the charged feeling of the text, And God Created Great Whales is more like opera than not – wrapping together character, emotion, and situation anddelivering the package through the unmatched instrument of the human singing voice.

Throughout the work, concerns with death and immortality are expressed in a variety of permutations. At one point Nathan fantasizes about his mind as a digital container that would survive his failing body, almost as if he could beam himself into those tape recorders, but in an active sense–the mind frozen would be no more interesting than death. There is a reference to a cenotaph, a memorial constructed to the dead who are buried elsewhere. And there is a superb aria which is the sermon to the seamen around the Biblical tale of Jonah, swallowed by a whale. A duet when the ship sails encompasses both the leave-taking on the journey and the leave-taking from life. And the idea of coming through to another existence is celebrated in yet another duet: "I will be innocent again, like a child again," they sing. The sinking ship continues the metaphorical imagery and lines like "I turn my body from the sun; I give up my spear" resonate in harmony with the wealth of imagery and words and song that cumulate to a powerful climax. Only Ishmael survives, of course, and the work closes on a final ecstatic duet.

What is startling is that this huge rush of imagination and creativity, this densely packed theatrical and musical journey is completed in seventy-five minutes. It’s opera as poetry, more profound in its complexity of thought and more effective in its delivery of beautiful, emotion-packed music than any other contemporary opera on the boards today.