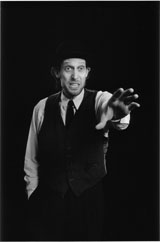 The story is told of the 19th century actor, down on his luck, who was reduced to touring the smallest and most tattered theatres in rural America, performing by himself before ragtag audiences. One night, halfway through Hamlet’s most famous soliloquy, the onlookers started booing and pelting him with ripe vegetables. He strode angrily down to the footlights and shouted, "Hey, don’t blame me. I didn’t write this stuff."

Bob Jaffe, creator of an evening of Samuel Beckett, is certainly not that bad an actor. He is, in fact, a fairly good actor. But, truth to tell, he is, like the actor who was pelted by the tomatoes, simply not able to handle his chosen material. Since Samuel Beckett is one of the great writers of the century, Jaffe must shoulder the blame. He gets some credit though, for he has attempted something extremely difficult. To choose and arrange material from Cascando, First Love, Watt, Waiting for Godot, Malone Dies, Molloy, Embers, Endgame, The End, Texts for Nothing, The Unnamable, and Company is a challenge. Then to memorize all this (well over an hour’s worth), and to perform it without a script handy or another actor to bounce cues off of, and to perform it all at a high energy level is an accomplishment. He gets an A for effort.

Unfortunately, Jaffe does not have what it takes to pull it off successfully. Two Irish actors, Jack MacGowan and Patrick Magee did excellent one-man Beckett performances in the 70s, but they were men who had known Beckett, older actors who could portray the emotionally and psychically weathered characters of Beckett’s creation. Billie Whitelaw performed brilliantly a few years later doing Beckett’s female characters. And, just last season, Bill Irwin, master of the physical as well as the verbal, triumphed in Texts For Nothing.

Jaffe is a young actor, lacking the physical or vocal sense that he has been around the block a few times, that he has lived and endured enough to earn the right to speak Beckett’s words. He sports a scruffy beard which adds the appearance of a couple of years, but physically and vocally he is too young. His voice is too weak for the material, and tends to be monotonous. His gestures are repetitive. Director Peter Wallace has him bounding around the stage, jumping up and down off of set pieces, but rarely in clear support of any of the textual material. At one point Jaffe takes off his tie, his coat, his vest, and his shirt as he speaks, folding them neatly, and then later puts them all back on again. During one long speech he puts one pebble after another into his mouth, then takes them out again. He plays with a tiny doll-like figure and a pencil stub as he speaks. All of these actions are distracting, and none of them seem to have anything at all to do with what he is saying.

The set, by Jeremy Woodward, is a circular platform adorned by a puzzling stack of firewood. Holly Ratafia’s lighting is cue-heavy and calls too much attention to itself. Jaffe’s one costume, by Marilyn Salvatore, is a threadbare, tattered black suit and vest, with scruffy bowler, and serves well as catchall attire for the many characters.