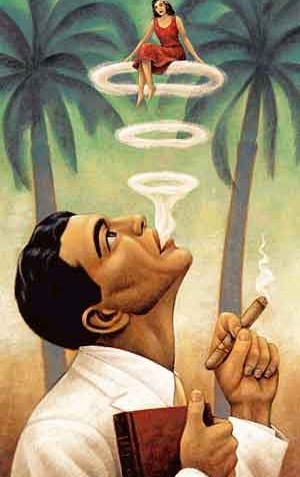 What happens when people refuse to change, will not accept technological advances, and do not know how to cope in a world that has passed them by? Playwright Nilo Cruz explores these predicaments in his Pulitzer Prize-winning play Anna in the Tropics.

Arena Stage has mounted the Washington, DC premiere of this play about factory workers who become intimate with Tolstoy’s novel Anna Karenina. Since this is a story of multiple passions gone stale, a fiery despair should be projected by the characters in this award-winning tale set in a Cuban community in Tampa, Florida in 1929. Unfortunately, Arena&#146;s production fails to generate enough heat to make the audience commiserate with a family whose individual members are not only forced to face a changing world that demands speed, but who also must grapple with sexual problems that include impotence, a runaway wife, marital infidelities, and possibly rape.

The action of the play revolves around a central figure known as the lector. In the industry of handmade cigars, there was tradition, from the late 19th century up to the Great Depression, of hiring a learned person to read newspapers, poetry, and great works of fiction to the mostly illiterate Cuban and Puerto Rican workers as they performed their monotonous tasks in the hot and humid conditions necessary to keep the tobacco leaves moist and supple. The lector, who often dressed elegantly and was seated like royalty on an elevated chair in the middle of the factory, was not only the factory workers&#146; escape from boredom, but also their teacher about the world. In today&#146;s terms, the lector was like a rock star who could influence not only what listeners knew about getting along with people, especially the opposite sex, but also their political views.

Anna in the Tropics opens with Ofelia, the wife of Santiago, the factory owner, eagerly waiting with her daughters Marela and Conchita for a ship bringing Juan Julian, the new lector she has hired. Concurrently, the action on stage shows a drunken Santiago forcing his half-brother Cheche to loan him more and more money to bet on the cockfights. Not really wanting to loan Santiago more money, Cheche gives in when Santiago agrees to give his brother another share of the factory.

As soon as Juan Julian appears in the factory to begin reading from Anna Karenina, a story of love and marital infidelity, the family of cigar-makers is stirred up and each person starts acting out his or her dreams and problems. From the moment Cheche encounters Juan Julian, Cheche wants to abolish his job. Cheche intends to mechanize the plant and over the roar of machines nobody could hear someone reading out loud.

However, Marela, the only unmarried female in her father&#146;s factory, immediately exposes Cheche&#146;s real reason for wanting to do away with the lector–Cheche&#146;s wife had run away with another lector some years ago. Of course Marela is infatuated with Julian whose name she had written on a piece of paper and immersed in water spiced with cinnamon and brown sugar to ensure before he arrived at the factory that he would bring sweetness into her life. Marela&#146;s married sister Conchita, however, harvests the sweetness of Juan Julian for herself when she gives up on her husband Palomo who has taken a mistress. The only person upon whom this lector has a redeeming effect is Santiago who, after first getting mad at Ofelia for not forgiving his gambling debts, confesses to her through a discussion about Anna Karenina that he fears he is losing his pride, self-respect, and the valued love of his wife.

Conchita asks Palomo if he has ever heard the voice of a deaf person because this raw, untempered voice is the one she wants to use to tell him about her longing for him. When he won&#146;t tell her how she can make him happy, Conchita says she will cut her hair and take a lover, too and, in doing this, she will love him in a different way. Conchita&#146;s psychology works, but still the drama fails to project the new passion between them when it occurs. About the cigar, Ofelia says, &#147;men marry their cigars and the white smoke becomes the veil of their brides.&#148; Conchita reminds Palomo when they first met what she said when she handed him a cigar, &#147;I slipped into your mouth like a pearl diver.&#148;

With vividness and beauty, Cruz&#146;s words show a community of passionate people in a pressure cooker of tropical heat, yet the passion does not combust on stage. Director Jo Bonney has selected an experienced, all Latino cast including Jason Manuel Olazab�l playing Juan Julian. Olazab�l made his Broadway debut in Anna in the Tropics.

This production is performed in Arena’s smaller Kreeger Theatre, providing the intimacy required for the play, and Arena has provided all the ingredients that should have led to success. Anna in the Tropics is one of only two plays to win the Pulitzer Prize without first having a production in New York and when the play did make it to Broadway, it only managed a three-month run with mixed reviews. Even under Bonney’s skilled direction, something in the structure of the play seems to squelch delivery of the passion that the words clearly demand. Perhaps the problem lies in the core choice by Cruz to have the heart-wrenching and tragic novel, Anna Karenina, play against what seem to be ordinary problems of ordinary people.