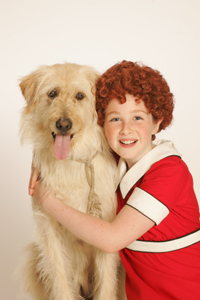 Events in the real world are making Broadway look mesmerizingly attractive these days. Better yet, a Broadway road company touring an "oldie," coming to a theatre near you. Annie arrived at the Golden Gate Theatre in San Francisco a few days after New Orleans was turned back into a swamp. The house was filled with adults. Belting orphanettes, a trained dog, Daddy Warbucks, FDR and a villainess/lush. What could be more therapeutic?

It may have been because it was opening night, but even the cast looked alive in this production. Cartoon characters work on stage when there&#146;s dancing and singing to prop them up, but it makes a difference when actors actually do something with these depthless parts. Alene Robertson, as Miss Hannigan, the aforementioned villainess/lush, knows how to force an audience into submission. Laughter works faster than Zoloft.

Chunky rather than towering, (other Miss Hannigans have been more spinsterly and vulturelike), Robertson is so masterful a physical comedian, she can make the act of sitting seem like a statement of character. Her gestures are broad and her songs are terrific. When she meets FDR she humbles herself with such ridiculous extremity it is hilarious. There&#146;s plenty to like about this production of Annie, but the best thing is Alene Robertson.

The book, setting the action in a Depression-deadened 1933 Manhattan, takes some of the saccharine off the otherwise kids-and-a-dog-style-cuteness by adding the grit of (singing and dancing) homeless folk, and the appearance of a knife. Still, isn&#146;t what we really care about the high notes sung by little Annie during her big song, "Tomorrow"? Can she out-warble the original 1977 Annie, Andrea McArdle? Does she look 11? Marissa O&#146;Donnell was all of the above. Her singing voice had the appropriate amount of pre-teen shrill, but always with overtones of prettiness, the little girl inside the hardened orphan. Her opening ballad, "Maybe" was actually touching. What more can you ask from a musical? Tears, laughter, little girls, a dog?

As touring machines go, this group offered a refreshing dose of talent and committed performances. For a few hours, the ubiquitous images crowded into our brains, the horrors constantly unreeling on CNN, were replaced by a little girl in a red wig singing hokey words of hope. "The sun will come out…". It was enough. It was exactly enough.