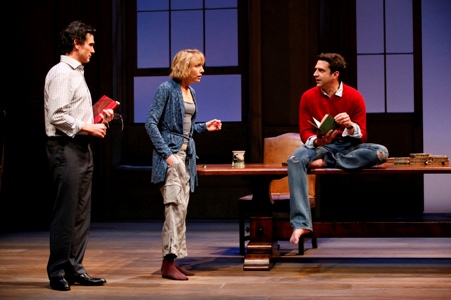 Tom Stoppard is the reigning show-off of contemporary playwrights. He’s quite able and cheerfully willing to write circles around any rival, radiating erudition, intellectual complexity, theatrical savvy, and clipped British wit in every direction. And no play illustrates this better than his 1993 “Arcadia,” which won the Tony Award for Best Play when it opened in New York at Lincoln Center Theater in 1995 and which is now on Broadway in a revival directed by David Leveaux. Characteristically for Stoppard, the play gathers in one room a multitude of thinking people, which provides a rational excuse for setting in motion simultaneous conversations about chaos theory; English landscape architecture; the breakdown of the Romantic imagination; the fallibility of historical research and the ambiguous role of intuition in same; and determinism vs. free will, with breezy digressions on two or three (dozen) other subjects, such as Lord Byron’s hunting prowess and the burning of the library at Alexandria. Throughout the play, Stoppard demonstrates his mastery at following a perfectly eloquent disquisition on some brain-cracking topic with an equally persuasive argument contradicting the first and then casually introducing a completely plausible third point of view on the same topic. And in “Arcadia,” he has these conversations take place in the same location—a sprawling estate called Sidley Park in the English countryside—in two different time periods, 1809 and the present. Because, you know, he can.

The 19th-century plot revolves around Septimus Hodge, a young scholar (and school chum of the never-seen Lord Byron) who is employed as tutor for Thomasina Coverley, the supernaturally intelligent adolescent daughter of Sidley Park’s aristocratic occupants, when he’s not romancing the girl’s mother, Lady Croom, or the rapacious wife of a bad local poet named Ezra Chater. The 20th-century plot bounces two different flavors of scholarship—represented by Hannah Jarvis, an author painstakingly researching a book about English gardens, and Bernard Nightingale, a brilliant but recklessly ambitious professor trying to make his name as an expert on Byron—off of the scientific mind of Valentine Coverley, a distant relative of Thomasina who’s investigating questions of fractal geometry similar to those of his teenaged forebear.

The first six scenes of the play alternate between time periods, objects accumulating on the large table that is the central and really only set piece, until the final scene becomes a bravura piece of puzzle-making as the characters overlap in space. By then Stoppard has planted all his clues and resonances so the characters’ thoughts and behavior demonstrate everything the play has to say about the effect of heat exchange (aka sexual passion) on the predictability of patterns in nature.

I remember when I saw the original New York production being so dazzled by the density of the language and ideas in “Arcadia” that most of it went right over my head, leaving me with few last impressions except admiration for Stoppard and the play. This time around, I took the precaution of reading the play the day before I saw the production, which I highly recommend. That is to say, I highly recommend seeing the show, AND I recommend you read the play first. The production isn’t perfect, but I liked it better than Trevor Nunn’s version at Lincoln Center. As he did with “The Real Thing,” director David Leveaux has worked very hard to ground Stoppard’s irrepressible flights of speech and metaphor and theatrical fireworks in recognizable human behavior. I consider it a tribute to Leveaux’s staging that I left not just cerebrally stimulated but genuinely moved by the understated tragedy that ends the play.

While none of them are dazzling, most of the actors give interesting performances. I thought all the leads were quite good. Bel Powley as Thomasina looks properly unformed and adolescent but conveys her fast, wondering mind. I liked Tom Riley as Septimus, although thinking about the performance afterwards I realized that it wasn’t especially evident why women would be throwing themselves at him—he’s not all that good-looking. But then one of the central points of the play is that sexual attraction is unpredictable and often quite mysterious. I liked Lia Williams’ performance very much as Hannah—she’s a wonderfully detailed British actress—though she exudes a warmth that belies the character’s supposed academic standoffishness. Billy Crudup’s physically mannered performance as Bernard bothered me at first—it seemed excessive, narcissistic, disconnected, too showy… but then, I had to acknowledge that those are qualities of the character, so he managed to convey them perfectly. At first I also thought he was too good-looking to play this kind of scholar; he looks more like someone out of “Mad Men.” But then I realized that what makes the performance really smart is that it upends all clichés about duddy academics. Same goes for Margaret Colin as Lady Croom, a character that could easily be played as caricature, a kind of Oscar Wildean figure spouting crisp aphorisms, but Colin walks the line beautifully, and the scene in Act II where we get to really witness the intimacy between her and Septimus is exceptionally well played and surprisingly affecting.

While Crudup’s Bernard seems to be all about me-me-me (both the character and the performance), Raul Esparza’s quiet, thoughtful, somewhat dreamy Valentine operates entirely and admirably in service of the play, which again is perfect for the character. The one performance that didn’t work for me was Grace Gummer as Chloe, who’s supposed to be Thomasina’s counterpart in the 20th-century plot but doesn’t convince as a smart cookie and makes that mistake of an older actress overplaying young-girlness.

In “Arcadia” Stoppard explores one of his favorite themes, the quest for knowledge as an elemental force. This play asks the audience to make many connections that aren’t spelled out, the same way its questing characters do. Piecing together the past, whether a family history or academic research, requires a willingness to speculate, sufficient cultural background to make educated guesses, some confidence about intuition, and a musical ear for picking out the melody from small scraps of information. Plus, not being afraid to get it wrong. Seeing the play again, I remembered that I attended the opening night performance of “Arcadia” at Lincoln Center Theater. While watching it, I got it into my head that the play was Stoppard’s secret rewrite of “A Midsummer Night’s Dream,” based on the pastoral setting, the two sets of characters inhabiting parallel realities, and the repeated references to lunatics and poets in a play abounding with lovers. I thought surely that the key to “Arcadia” lay in Theseus’ speech in Act V of “Dream”:

Lovers and madmen have such seething brains,
Such shaping fantasies, that apprehend
More than cool reason ever comprehends.
The lunatic, the lover, and the poet
Are of imagination all compact.
One sees more devils than vast hell can hold—
That is the madman. The lover, all as frantic,
Sees Helen’s beauty in a brow of Egypt.
The poet’s eye, in fine frenzy rolling,
Doth glance from heaven to Earth, from Earth to heaven.

Then I went to the opening-night party at Tavern on the Green and got to meet Stoppard for a moment. When I checked out my theory about “Midsummer Night’s Dream” with him, he looked at me like I was crazy and said, “No.”