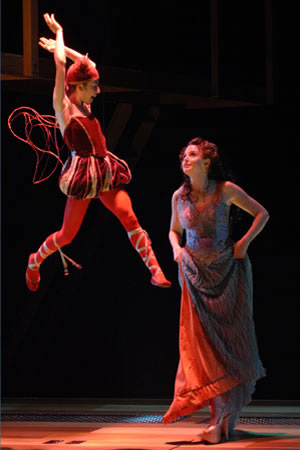 Written and directed by Mary Zimmerman

"So This is what the gods do to amuse themselves…" notes a king in the early moments of Mary Zimmerman’s highly imaginative "Argonautika." And that’s about it in a nutshell, although it will take some two and a half hours and more than 20 characters to fully tell the tale.

In Tony Award-winner and MacArthur Fellow Zimmerman’s hands, the ancient myth of Jason, a dispossessed prince who sails over uncharted waters to bring back a fabulous prize, is less of a hero legend than a human one. Not that Jason, capably played by Jake Suffian, is not a hero; he slays his share of dragons and monsters en route to his destination. But, most of all, he is a man — frightened, overwhelmed, lustful, brave, wise sometimes, foolish others and, ultimately, faithless. The men of his crew — heroes all, from the pugnacious Meleager (Andy Murray) to that ultimate strongman Hercules (a fabulously boastful Soren Oliver) — are similarly riddled with human frailties. When Hercules’ beloved friend Hylas (Justin Blanchard) succumbs to the fatal wiles of a water nymph, the burly hero cries like a baby and nearly wastes away.

Many adventures befall the sailors of the Argo before they sight the Golden Fleece. Harpies, sea monsters, ill winds, crushing rocks and seductive women slow their progress and block their way. But these guys get a lot of help from on high. Hera, the beautiful, powerful Queen of Heaven and Athena, Goddess of Wisdom, have pledged to guide and protect them. Christa Scott-Reed ("Honour") plays the jealous, vengeful Hera with a sharp edge and a sharp tongue. Sofia Jean Gomez was a wise and wonderful choice for Athena. In fact, the entire cast operates on such a high ensemble level it is difficult and almost unfair to single any one performance out. At one point Hera and Athena enlist the services of their fellow Olympian Aphrodite, Goddess of Love, nicely played as a vain airhead by Tessa Klein.

Yes, these are a lot of folks to keep straight — and there are more — but writer/director Zimmerman has given each a distinct personality and weaves her rich tapestry with such a variety of threads that things never get difficult or dull. The heroes extol their various virtues in a mesmerizing (and funny) rap routine. Ghosts, prophecies and dire portents are leavened with laughter and a giant in boxing gloves speaks in an accent akin to the Terminator’s. Imaginative puppetry (Michael Montenegro, designer) gives us babies, birds, a one-eyed dragon and a stage-sweeping sea monster for Hercules to slay. It’s part comic book, part morality play and wholly entertaining.

Even in the second act, when things turn more serious, there are fanciful twists. Struck by Cupid’s dart, the lovesick sorceress Medea (sympathetically played as a confused young girl by Atley Loughridge who originated the part at Chicago’s Lookingglass Theatre) walks around in a blood-stained dress with the actual arrow sticking out of her, front and back. Jason cannot complete his quest without Medea’s magical help and if that involves deceiving her father and killing her brother and fiancee, oh well, it’s all in a day’s work. Their love, at first, is innocent and sincere. But when ambition (and, perhaps, a little boredom with married life) impel him to cast his eyes elsewhere, he dismisses her with a curt (and contemporary) "It’s not about you."

The end of the story, hurriedly summed up in the final moments of the play, feels a bit disappointing after the leisurely progression of wonders that have gone before. But, after all, this is the story of the Argonauts and their voyage. "Medea" is altogether another play.