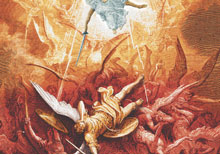 Marina Carr&#146;s Ariel is a play which is clearly grappling with several major issues. In attempting to negotiate a space between an Irish &#145;classical&#146; tradition and an ancient Greek one, and in trying to incorporate the not incompatible concerns of contemporary Irish politics and society with those of postmodern theatrical forms, the play tells a story that is at once familiar and poetically abstract. It is based on Euripides&#146; Iphigenia at Aulis, drawing its tale of a father who sacrifices his daughter to the Gods for their favor in war through the masterplan of an ambitious politician in contemporary Ireland.

The setting is the cavernous home of Fermoy Fitzgerald (Mark Lambert), an uncompromising businessman in the Midlands who has already been defeated once in his bid for election to the D�il but is determined to win on his second. As the play opens his family celebrates the sixteenth birthday of his daughter Ariel (Elske Rahill), a celebration which quickly disintegrates into petty bickering and the now all-too familiar rhythms of familial dysfunction.

The house (and home) is not represented in realistic terms however. Frank Conway&#146;s impressive set design makes full use of the Abbey space. Unadorned high brick walls bathed in deathly purple, green and blue hues from Rupert Murray&#146;s lights threaten to dwarf the human occupants of his symbolically-charged space. A metal staircase provides a stage left exit which serves as a gate to heaven or hell as characters move in and out of the arena of conflict. Only a large dinner table and a small drinks table decorate the stage.

The family at the center of this world may wear modern dress and live in a physical reality framed by contemporary objects including automobiles, stereo units and television, but they too are far from realistic. Playing out the ancient dramatic dynamics of Euripides&#146; original, these are Kings and Princesses embroiled in primal myths. "The Earth is over," screams Fermoy to his monk-brother, Boniface (Barry McGovern). He speaks of an (Irish) society built on kindness which has utterly failed to advance the cause of civilization. His act of sacrifice is an homage to the old Gods of vengeance and purgation which will supposedly grant him the power to change the world. Mother-son and father-daughter relationships are exaggerated to breaking point and the dialogue frequently takes the form of what amounts to monologues on weighty subjects, making it extremely difficult for Carr to keep her audience rooted to her interrelated concerns for the everyday lives of contemporary Irish men and women.

The play attempts to explore the anxieties of a modern Ireland with recourse to premodern theatrical forms, stopping along the way to touch on the themes of family, religion, and politics which have traditionally occupied Irish dramatists. This has been attempted before, even as recently as Sebastian Barry&#146;s Hinterland. Barry used Shakespeare as a reference point and failed to find the required level of high drama in the life of former Taoiseach Charles Haughey. Carr is not necessarily any more successful. Her evident care with language and at least some successful attempts to blend the narrative spaces of naturalistic drama with monumental villainy of the Greek tragedy do make it interesting.

Unfortunately, by the time the play reaches its multiple climaxes complete with ghostly apparitions, wailing from the wings, and on-stage bloodletting, some of the audience had given over to inappropriate laughter, suggesting that true balance between elements has not been achieved.

Carr has earned a reputation as one of Ireland&#146;s leading dramatists in the past few years through plays such as The Mai and The Bog of Cats, and this production has been long-expected and much-anticipated. Ariel has the merits of being a serious and thoughtful piece of theatrical experimentation brought to the stage with the full force of a National Theatre production. The set and lighting are extremely dramatic, the cast work hard with the mixture of styles, and though many scenes (especially those between Ingrid Craigie as the Clytemnestra-like Frances and Eileen Walsh as her neglected daughter Elaine) are played on the verge of hysteria, director Conall Morrison maintains enough control to keep it together. It is a seriously flawed piece however, on the micro level as well on the grander balancing scales between theme and form. The first act is arguably overextended and repetitious, the character of Sarah (Joan O&#146;Hara) seems curiously redundant, and in spite of the demands of classical revenge tragedy, the play could have ended a bit more precipitously. Ariel will most likely not be dismissed out of hand in future readings of Carr&#146;s work, but whether this is sufficient reason for audiences to seek it out while it is fresh to the stage is another question entirely.