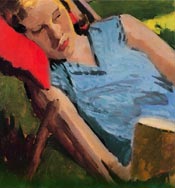 Would you read a book entitled "Recurring cultural, political and social modes in the upper strata of Roman Catholic society in rural Ireland since the act of Catholic Emancipation"? Perhaps not, but you might go to see Brian Friel&#146;s Aristocrats, a play in which the academic interrogation suggested by this self-consciously unwieldy title is central, even if only to throw the character drama which unfolds into representational relief.

The setting is Ballybeg Hall, County Donegal, in the mid 1970s. American academic Tom Hoffnung (Bosco Hogan) has come to this Catholic &#145;Big House&#146; to write his book. He is in search of insights into a disappearing way of life. Once the center of privilege and influence, the former home of a Supreme Court Judge and now the residence of ailing District Justice O&#146;Donnell and two of his daughters, Ballybeg Hall is a crumbling, culturally and socially dislocated monument to a past with no more meaning to the present generation than a dusty academic tome.

Four of O&#146;Donnell&#146;s five children are reunited for the pending wedding of the youngest, Claire (Justine Mitchell). A fifth is a missionary nun in Africa, whose presence, like that of the old man, is literalized mostly by sound alone. The reunion is especially fortuitous for Hoffnung, who, along with the audience, is treated to a vivid illustration of the latter day condition of the upper strata of Roman Catholic society in rural Ireland.

Huffnung is little more than a plot device, a thematic signifier which allows Friel to position the audience outside the emotional and psychological worlds of the play&#146;s characters, but the character serves an important function. His double displacement from the social and intellectual worlds of the Irish people allow him to ask obvious questions to which Friel provides complex and involved answers.

Aristocrats is one of Friel&#146;s best known works–an intricate, linguistically rich, symbolically charged exploration of the slow death of one part of Irish society and the effect this passing has on those left behind. This production is a typically handsome Abbey exercise, directed by Ben Barnes and designed by Joe Vanek. It has been solidly cast, with Peter Hanly (Communion) making a sympathetically affected Casimir, the only brother. Casimir, like all of his siblings, has been &#145;touched&#146; by the experience of living in Ballybeg Hall, and is seemingly oblivious of his persistent disconnection from the world around him.

A key moment occurs late in the play when Huffnung, who has been listening with rapt attention to Casimir&#146;s anecdotes about the literary luminaries who have stayed in the Hall over the years, points out that his reminiscence of meeting W.B. Yeats cannot possibly be true given the poet died two months before Casimir&#146;s birth. Confronted by the specter of a false (or inherited) memory which symbolizes the relationship between the past and present experience of the Irish gentry, Casimir fails to realize its significance. Huffnung, whose name Casimir tells us means &#145;hope&#146;, has realized it though, and essentially departs the stage for the last act after the death of the old man, during which the children confront the real meaning of change.

Friel&#146;s writing casts a spell over audiences which time has not dulled. Beautifully chosen words are spoken by characters cannily crafted out of an environment rich with history, culture, politics, and human emotion. Generally well performed by a game cast, the production is perhaps marred by an additional level of distance between the text and the audience which comes from the years which have elapsed since its writing. The world of these characters is even more remote now than it was then, and the well-meaning gentility with which these damaged souls approach their reflection upon their lives is comparatively pallid in the age of Jerry Springer.

That said there is perhaps an aptness in this tale of social change insofar as the distance between the remnants of the gentry and the ascendant peasants central to this story may have meaning for the Ireland emerging in a daze from the years of the Celtic Tiger looking back upon another lost epoch, one in which theatre of this caliber was part of a new and exciting intellectual energy which seems recently to have dissipated.