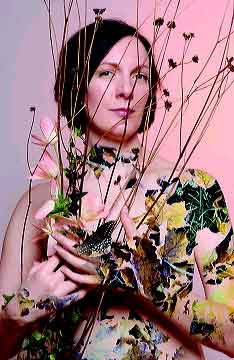 Something strange happens when Shakespeare goes out of doors, every summer, all over the country. A fit of poetry, something like Doll Common’s fit of Hebrew Greek, overtakes pleasant, young people. Or maybe it’s a fit of drama, unlike theater the rest of the year, calling out in the voice of the season to young actors ordinarily huddled around a director on a small, dark stage. When the producers are lucky, as they are in the Berkshire’s Shakespeare Festival, they get well funded and well advised about how to spend the funds on pretty people, lovely costumes and airy sets.

But that’s not the strange thing that happens in summer, nor does it explain the young people’s fit of poetry either. These rather come with the appeals of the event itself, prevailing over all the drawbacks that during the rest of the year would guarantee a bad, bad show. Put it the other way around: Shakespeare in summer almost means that bugs, traffic noises, jostling crowds, uneven sound from a makeshift stage, pretty but inexperienced actors, misunderstood speeches, all contribute, nay are necessary, to the occasion of a Shakespeare play. Usually a comedy. (The favorites Richard III and Hamlet are winter fare.)

Let me start again. He’s repertory. He’s the top. Yet he was–is–the most forgiving of all writers insofar as remaining Olympian while his actors fail to understand all his words. The situation for an audience is comparable to hearing only some notes in a well loved concerto. In a mood for culture and edifying sounds, in summer often provided by stars of stage and screen, the audience lets a play wash over them. So, in the Berkshire’s As You Like It, there are nice voices, nice people, and a smattering of Shakespeare spoken by pleasant actors. To be fair about it, understanding all of Shakespeare is not really necessary to unraveling the several plots: the main one about a girl out of favor, Rosalind, dressed as a boy, pursuing a boy also out of favor, Orlando, who doesn’t know his own power, yet. It’s a double Cinderella story.

The gender implications have made As You Like It enormously popular in our gender conscious moment, quite apart from the romantic confusions proposed by the play or from the richness of its language. A clear sense of Shakespeare, to the contrary, is crucial to the idea of the Forest of Arden where four romances come to flower. It’s a magical place and he is always primarily about magic, whose source here is love. Rosalind banished from her uncle’s court escapes civilization and its rigid demands into the forest of Arden, where she finds her lost father. Joined by her friend Celia and her jester, Touchstone, Rosalind and her outcast father comprise an ideal society restored at the end to its rightful rulers.

Fathers and daughters hold primary place on Shakespeare’s stage. Arden also, of course, brings Rosalind her perfect lover, Orlando, another wrongful outcast needing to be reconciled with the reigning duke, his brother. A set of brothers in each generation show political power to be stronger than blood relationships.

The looks of the play far outweigh any effect of its language&#150;there is lots of superior production. Lighting makes an alternating blue, or violet, or green backdrop with a beautiful silvery fringe along the top to suggest trees. When in court, the players are dressed in sober black; out in Arden they’re in perfect, creamy white. The banished girls look nearly too sweet to persuade us they are threatened by isolation and possible death. So too, a perfect Touchstone fails to provide the requisite reassurance of his protection since they are never in danger. These, however, would be minor flaws if the pace of the whole were not deadly. An effort to be explicit leads as it must to bad ends. Tone of voice lapses into naturalism, bane of all theater, and the weight of every word spoken falls like a stone on the heart. Even Orlando’s giddy love poems tied to the trees begin to seem too heavy for branches to bear, though visually, once again, the piece is consistently lovely.

A weightier and perhaps insoluble problem concerns the company’s expectations for the play, as near as these may be culled from its presentation and the company’s literature. In a curious fashion, the elements making As You Like It distinctive are played down for the sake of those shared with the other festive comedies. That is to say, the play differs a great deal more than it resembles Much Ado About Nothing or A Midsummer Night’s Dream. It ranges over four social classes; celebrates a marriage in each; concentrates on more fully developed, individualized clowns, from Jaques to William the Countryman, than in the other comedies; offers two distinctive heroines; and includes lovely songs.

But the company’s attitude to the play, like its program notes, seeks to minimize differences among its characters, already quite subtle as given, as well as the play’s differences from the other comedies. As You Like It is not Much Ado or Midsummer Night’s Dream despite their shared features. The play as presented has a generalized sense of itself as one of Shakespeare’s Comedies–with a few fools, a pretty heroine, a virtuous but socially inept hero, an inheritance swinging somewhere in the balance&#150;rather than as a highly particular dramatization with the remarkable invention called Rosalind. Shakespeare’s largest female role is nearly dismissed in a democratic gesture of fairness: all players get equal attention. As one result, the action tends toward monotony; everybody looks, sounds, and projects niceness in that mode I identified with naturalism for lack of a more accurate description. There’s no such "ism" in Shakespeare. One might say the happy ending begins in Act One, Scene One so there is no where for the action to go. Artifice, the great asset of comedy disappears in a blur of pleasantness. Pleasantries? Either way, that yawn at the back of the throat keeps threatening social decorum.